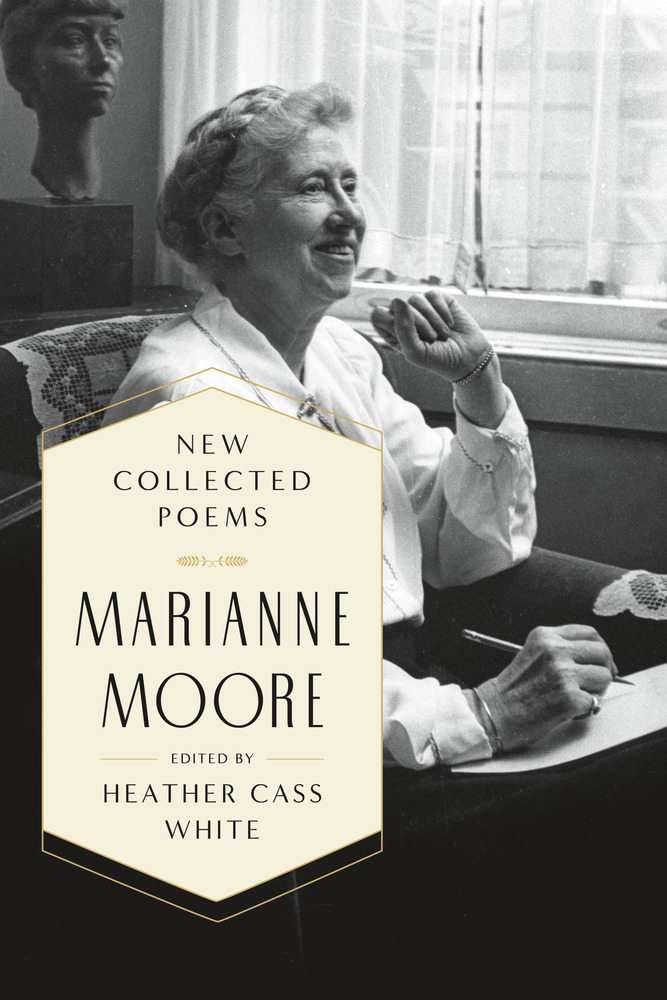 Marianne Moore’s poetry asks how fully language, by focusing powerfully on objects and framing them in allusive contexts, can embody the world. As a poet who came into her own in the high modernist period (Observations was published in 1924), Moore belongs with Eliot, Pound, Williams, and Stevens as one of the key figures in twentieth-century English-language poetry. Although her characteristic syllabic meter is too recherché for subsequent poets to embrace, her sharp-edged, highly disciplined rhetoric and precise description have appealed to many, including Elizabeth Bishop, Brad Leithauser, James Merrill, and John Ashbery. Moore also wrote elegant free verse, but her most challenging work—whether free or metrical—asks the reader to experience and savor phonemes and syllables as well as words and phrases. Her poems revel in description not just for what it reveals about the world but also for the flavor of language at its most concrete. This gives her poems a conspicuous aural refinement that distinguishes it from most other poetry:

wade
through black jade.
Of the crow-blue mussel shells, one
keeps
adjusting the ash-heaps;
opening and shutting itself like

Moore’s self-presentation was eccentric, and the two poetry collections she issued in her lifetime reflect her reluctance to expose her work as completely as her serious readers desired. She wrote her strongest work before the Second World War, but tinkered with it all of her life. Her revisions often were radical. In the second printing of Observations, she famously redacted “Poetry” from a two-page poem to a thirteen-line free-verse poem, then presented it for an anthology as a three-stanza syllabic poem, and then, for her Complete Poems, reduced it to four lines. Consequently, readers have found her challenging not for the modest difficulties of her poems but for the problem of finding and deciding upon the proper text.

In recent years, her poetry has become more available. In 2002, the University of California Press issued Becoming Marianne Moore: The Early Poems 1907-1924, which includes facsimiles of Observations and of individual poems in periodicals. Then Grace Schulman edited a complete edition (2003), ordering the poems not by their initial book appearances but chronologically. This was the first real collected edition, and gathered some 256 poems (including a few selections from her Fables of La Fontaine).

Now, following a 2016 paperback reprint of Observations, Farrar, Straus and Giroux gives us Heather Cass White’s New Collected Poems. This supposedly “definitive edition” of Moore’s poetry contains 188 poems. In her introduction, White does not address Schulman’s edition (although she lists it under “Works Cited”), and explains this discrepancy in contents only indirectly with an editorial essay preceding her notes. In the course of this essay, however, she argues that “the situation since 1981 has been this: Moore’s readers have had available to them approximately half of what she actually published.” Obviously this is not true. Why White has effaced Schulman’s work is a puzzle to me.

White and Schulman differ in their editorial approaches. White has chosen to reprint the poems as they originally appeared in book form or, in some instances, in journals. Schulman reprints revised versions from the 1967 Collected Poems, but includes many earlier versions in her main text or in her notes. She also reprints far more uncollected poems, which is why her edition is bulkier. White arranges her edition on the basis of Moore’s original collections (excluding the Selected Poems edited by T. S. Eliot and the two collected editions Moore herself prepared). Schulman orders her collection mainly on the basis of chronology. On the whole, I prefer White’s ordering, but Schulman’s is instructive.

Neither of these editions can claim to be definitive. White admits that hers is far from the variorum text ultimately required. She notes that such an edition would run to “multiple volumes.” Since it’s unlikely that a commercial publisher would want to invest in such a complex and expensive production, the committed or academic reader of Moore will want both White and Schulman’s collections. But for the general reader, if any remain out there, New Collected Poems may be the right choice since, as White says, “Moore was a major force in American Modernism, and … the best way to understand that force now is to encounter her work in the forms it took at the time it was written.” For the revised versions, and for its additional uncollected poems, Schulman’s edition is essential.