Skip to content
The Complete Poems of A. R. Ammons 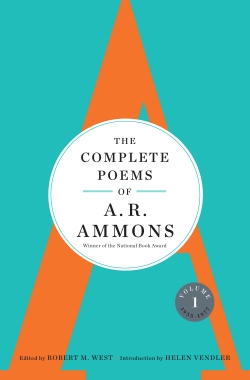 The Complete Poems of A. R. Ammons

by A. R. Ammons, edited by Robert M. West

These thoughtfully edited volumes, though expensive and unwieldy, belong in every serious poetry collection. A. R. Ammons is our most comprehensive poet of natural forces. Fluid dynamics, entropy, flexibility, resistance, electromagnetism, and gravity empower and enliven his imagery, drawn largely from nature.

In “Runoff,” a characteristic brief lyric, the syntax and shape of the poem embody the title:

curve, responsively slow to the
sizable ridge it
tended

The flow of syntax complements the depicted flow of water, but this flexible and dynamic phraseology occurs in all of Ammons’s work. His now-familiar argument that a poem is a walk finds its initial expression in “Corsons Inlet,” the title poem of his third collection (1965), in which the speaker ambles at a comfortable pace, parsing the landscape as he goes:

by transitions the land falls from grassy dunes to creek
to undercreek: but there are no lines, though
change in that transition is clear
as any sharpness: but “sharpness” spread out,
allowed to occur over a wider range
than mental lines can keep:

The colon, that sign of “ongoingness,” is Ammons’s characteristic punctuation mark, while “transition” is another favorite term, suggesting continuity with change, one of his key topics. All through his long and fruitful career, Ammons traced patterns, movements, and transitions, acknowledging that entropy, and not redemption or any other religious concept, will be the outcome of the universe. He is an important poet for those who find conventional religions ideas unconvincing, yet believe there’s order in the universe.

In the same year as Corsons Inlet, Ammons published Tape for the Turn of the Year, the first of many long poems focused on particular aspects of natural process. Tape is concerned with human perception, the way it incorporates disparate sensations and images. It treats the details of ordinary life as aspects of that gradual creeping toward entropy that characterizes all movement:

and how to replace the
shingles & whether to put
the money in SKF or
Xerox, and the clauses in
insurance plans &
the “political
situation”:

Following this, “Hibernaculum,” a long poem that first appeared in his Collected Poems 1951–1971, explores the role of the poet in a universe lacking humanly comprehensible motives. Sphere: the Form of a Motion (1974) explicates the role of verbs in depicting the many varieties of shaping motion. It may be Ammons’s most comprehensive portrait of his world in all its swirling, striving, growing, shrinking, thriving, decaying multiplicity.

the anthology is the moving, changing, definition of the
imaginative life of the people, the repository and source,
genetic, the critic and teacher protect and reveal the source

Much later, in 1993, Ammons would publish Garbage, the ultimate poem about entropy. It reads in some ways as a response to Sphere, since it depicts the end to which all motion inevitably tends. However, Glare (1997) depicts the human consequence of entropy—the aging, the familial tragedies, and the decay of the body, which sets in at birth. Long, sad, comic, and rich with emotional nuance, Glare stands as Ammons’s definitive statement on the human condition. The briefer poems he wrote after it, including the wry lyrics of his posthumous collection, Bosh and Flapdoodle, often strike a more personal note, one that sometimes falters into nostalgia but also lends a more personal dimension to this massive body of work.

In her insightful introduction (printed in both volumes), Helen Vendler observes that Ammons, “with his complex eye, has become one of America’s most compelling nature poets,” but notes also that he is highly alert to the underlying geometry of things. Ammons has more of a scientific mind than most poets, but he also has a visual acuity that is always searching for underlying form. He usually finds that form, and it is his ability not only to depict, but to reenact it, that makes him one of our greatest poets.