Skip to content
The King is Always Above the People 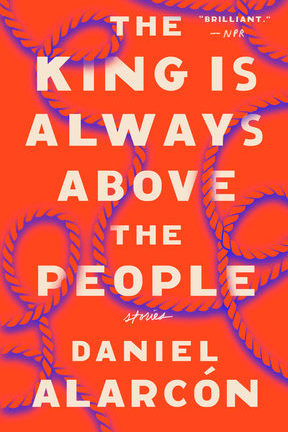 The King is Always Above the People

The King is Always Above the People, a story collection ranging from flash fiction of just a few pages (“The Thousands”) to novella-length pieces (“The Provincials,” “The Auroras”), is the latest book from the Peruvian-American writer and journalist Daniel Alarcón. The tales exhibit Alarcón’s admirable storytelling skills and sense of timing, putting on display messy characters—mostly male—and their ethical plights in ways that challenge readers both to empathize with them and to contemplate the morality of their actions.

Alarcón is a journalist as well as a fiction writer. He hosts the Spanish-language podcast Radio Ambulante, which features investigative journalism from Latin America that often allows the voices of the people covered to be heard extensively. The stories collected in The King is Always Above the People span loosely identified spaces across Latin America and the United States, and appear informed by Alarcón’s journalistic engagement with stories told by people across the region. Many of the stories are set in Peru, and often in or around Lima, sometimes identifiable as such only to those familiar with the city, through phrases like “the noisy intersection of República and Grau,” or “Avenida Cahuide.” Others are set in places deliberately left vague, like “the provincial capital” or “the port city.” We know “The Ballad of Rocky Rontal” takes place in the U.S. because “you’re seventeen when a crew of Sureños come up from Los Angeles.” While the Peruvian and American settings are perhaps to be expected given Alarcón’s personal background, his work with Radio Ambulante has clearly informed his fiction, which brings to life a variety of Latin American settings. There is both a specificity and a kind of Latin American universality to many of the stories. “República and Grau,” a story about a blind man and a boy begging for money at a busy intersection, conjures images and experiences that could almost as easily be found in Mexico City as in Lima.

Many of the stories present moral dilemmas peculiar to being a man, and often more specifically, a Latin American or Latino man. How does a man do the sometimes dirty work he feels he must do to protect his family, and still retain his honor? What does it mean to be a good father? A good son? A good lover? Often behind these questions lies another one: what does it mean to be a man in a world of power asymmetries? “The Ballad of Rocky Rontal” tells, in the second person, the story of Rocky, who became “the man of the house” at the age of 10. The tale shows the reader the kind of world and circumstances that can lead a man to rob grocery stores at gunpoint, to murder someone, to seek revenge, and also to try to make amends. When Rocky robs grocery stores, he “take[s] the change too” and puts it under the pillows of his younger siblings: “It’ll make them smile when they wake up.” From the outside, Rocky is a criminal. But his story reveals how the exigencies of being male in his environment shape him. In juvenile detention, among other “unsmiling boys just like you,” the counselor “calls you a gang member. You’re offended. [ … ] These are your friends, like family.” The story allows the reader to see the criminal as a boy in a world of power structures working against him; whether this exonerates him is another matter.

The stories in this collection are full of observations about boys and men, both overt and oblique, that are entwined with questions of power and possession. In the closing story, “The Auroras,” the narrator tells us that the protagonist, Hernán, having embarked upon a relationship with a single mother who splits her energies between him and her young son, “was falling in love, in the profoundly selfish way men often do. He wanted her for himself.” It’s love all right—but of a possessive kind that gives the relationship an expiration date.

The intersection of power, powerlessness, and masculinity conditions the morally questionable actions on display in many of the stories, including “The Provincials.” The narrator is an aspiring young actor named Nelson who travels with his father to his father’s hometown and keeps being mistaken by the locals for his brother, the one who went to the U.S. For these townspeople, leaving for the U.S. is a way of escaping stagnant provincial realities and fulfilling one’s potential. The father wants this kind of fulfillment for his son. In an argument with Nelson, he asks, “Do you know yet what you’re going to do with your life?” Later, in a bar with a group of older men waited on by two women, Nelson, with the approval of his father, slips into the role of the brother for whom he has been mistaken. His performance culminates in his kissing the younger server: “The virile foreigner has made his mark. The pretty girl has claimed her property. And it was the role of the gathered men to be appalled, or to pretend to be; the role of the mother to wail about her daughter’s chastity when she herself had never been chaste. But when it was over [ … ] everyone was grinning.” Nelson has put on an act, and so has everyone else. The young actor quite literally performs a version of masculinity that is not his own, following an unwritten script that contains implicit and contradictory assumptions about his power. He “has made his mark,” yet the young woman has perhaps possessed him, too.

The title of the collection, also the title of one of the stories, nods towards the power struggles in which the characters take part. The phrase “The King is Always Above the People” is a reminder of an apparently unchangeable state of affairs, and of the powerlessness that “the people” feel, and to which they react. The passage in which the title occurs at once presents as possible and denies the potential for the subversion of this state of affairs: the phrase is the inscription on a postcard depicting “the body of the dictator,” and in the image “every head is turned upward to face the expressionless dead man.” Even when dead, the hanged leader remains “above the people.” Alarcón writes in his acknowledgements that the title is taken from an Iranian cartoon: the tragic ironies of power, in his stories, are not bound to one place. The image is of a spectacle, a kind of performance, in which each party plays a role, and the powers structures are at once upturned and remain the same. It is within this reality that the men in the stories make decisions, take actions, and perform masculinity.

The pressures to fulfill the proper role of a man do not explain away the characters’ actions or absolve them. What the stories reveal is how these pressures are woven into the fabric of the structures in which these men operate. At the same time, each story offers a very different situation, very different characters and experiences, and can be read as a stand-alone work. Alarcón’s sparse yet vivid prose will keep you reading. Taken together, the stories can be read as a meditation on the messy challenges of masculinity and the power structures that provoke or exacerbate these, and a true invitation to consider the expectations we place on men.