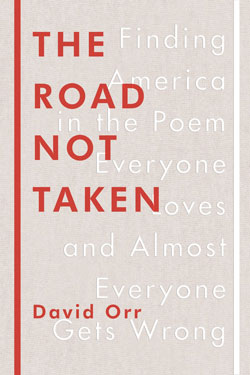 The Road Not Taken

For a half century, Robert Frost has been the most unavoidable of American poets: the nation’s inaugural inaugural poet, laureate of swinging birches and snowy evenings, a fixture as essential to the middle-school classroom as the chalkboard. He has also been our most defended poet: Frost’s respectable partisans, among them Lionel Trilling, Randall Jarrell, Joseph Brodsky, and Paul Muldoon, have insisted that we look more closely at the true Frost, a poet less lovely, more dark and deep, than the Frost we were taught to love. “The Other Frost” (to quote the title of a Jarrell essay) is not a populist, apparently patriotic bard, but a modernist whom you might call (depending on whose Frost you’re meeting) coy, playful, mischievous, malevolent, an unsparing skeptic (if not an atheist), or an unappeasable pessimist (if not a downright nihilist). These corrective lenses have scandalized casual readers, but they utterly delighted Frost: when, at Frost’s eighty-fifth birthday dinner, Trilling shocked guests by toasting Frost as “a terrifying poet,” Frost responded with a thank-you note: “You made my birthday party a surprise party.”

The latest defense of Frost—the longest, most publicized, and most extravagantly subtitled to date—is David Orr’s The Road Not Taken: Finding America in the Poem Everyone Loves and Almost Everyone Gets Wrong. Orr is a pithy, pushy poetry columnist for the New York Times Book Review, and the author of one previous book, Beautiful & Pointless: A Guide to Modern Poetry (2011). On face, The Road Not Taken looks like that earlier book, which performed a particular service for a particular audience: if you’ve always wanted to vacation to that foreign destination called Poetry, but simply don’t have the time, Orr’s travel guide will save you the trouble by condensing all that beautiful, pointless sightseeing into 200 pages. (This is Orr’s metaphor: in its introduction, Beautiful & Pointless analogizes modern poetry with Belgium, a beautiful and pointless country.)

But Orr’s new book is far subtler, stranger, and more subversive than his last, a how-to that admits defeat page after page, a manual for the uninitiated which never dumbs down or tidies up its unsettling suggestions. Orr has written the rare book on poetry that does not discriminate between audiences: newcomers and experts, Americans and Belgians, This Frost or the Other Frost, you or me or Orr. Why? We’re all wrong.

Orr’s Frost evolves into an unmanageable poet, but he starts off as something simple: the author of “The Road Not Taken,” a poem whose ubiquity goes without saying. Orr says it anyway, finding the poem’s deep cultural seepage in Ford commercials, rap lyrics, journalistic clichés, “one of the foundational texts of modern self-help” (The Road Less Traveled: A New Psychology of Love, Traditional Values and Spiritual Growth), and over four hundred books “on subjects ranging from political theory to the impending zombie apocalypse.” (Orr overlooks the prevalence of the phrase “the road less traveled” in America’s sex columns; his arguments suffer accordingly.) Whether or not you’ve actively tried to memorize this poem, you likely have its best-known phrases stored in your vocabulary. Or you know its moves, its progression of steps forth and looks back, the way you half remember a joke: a man walks into a yellow wood, two roads diverge, he chooses “the one less traveled by,” that makes all the difference, America-brand individualism wins again.

The punch line, Orr reveals, is that the road “less traveled by” apparently wasn’t: worn down by passersby “really about the same,” both roads “that morning equally lay / In leaves no step had trodden black.” Take these lines literally, and the speaker’s sonorous conclusion—“I took the one less traveled by, / And that has made all the difference”—sounds less like measured stock-taking than an after-the-fact justification. For champions of the Other Frost (and for Frost himself), “The Road Not Taken” is a dark joke at the expense of a self-deluding speaker—as Orr articulates the position: “The poem isn’t a salute to can-do individualism; it’s a commentary on the self-deception we practice when constructing the story of our own lives.” But Orr is too hesitant, too baffled, to fix the poem with one definitive reading, whether as “a paean to triumphant self-assertion” or as that paean’s wicked parody. Oscillating between extremes, “The Road Not Taken” ceases to be about a particular choice and becomes “about the necessity of choosing that somehow, like its author, never makes a choice itself—that instead repeatedly returns us to the same enigmatic, leaf-shadowed crossroads.”

Orr is not the first reader to complicate Frost’s greatest hit: see books on and by Frost, reviews of those books, even Orange Is the New Black. Orr makes his most original points, and finds his winningly self-skeptical voice, in the book’s four central chapters. All four work as discrete lessons on how to break into almost any poem; all four fail, exasperatingly but instructively, at cracking “The Road Not Taken.” In “The Poet,” Orr introduces a man as indecipherable as his best-known poem, obscured by biased biographers, adulatory defenders, and his own designing performance as America’s sour, lovable, libertarian sage (a role the culture now fills with Ron Swanson). In “The Poem,” Orr relates how “The Road Not Taken” was misunderstood by its very first reader and dedicatee, the English critic-poet Edward Thomas, and finds openings for that misunderstanding throughout the poem, from its title (which road wasn’t taken, and by whom?) to its final word. In the trendily interdisciplinary “The Choice,” Orr turns the poem into a case study for contemporary sociology, philosophy, marketing, and even neuroscience (Frost’s two roads map comfortably onto the brain’s left and right hemispheres). And in “The Chooser,” Frost’s poem serves as confirmation for two mutually exclusive notions of American personhood, the self as moment-to-moment construction and the self as wholesale discovery.

By now, Orr has perfected strategies for exposing poetry to new audiences. His deftest is a bait and switch: he gives airtime to outsider assumptions (“Poets, we assume, are not popular—at least after 1910 or so”) and hard-to-gauge truisms (“Poetry has always oscillated between guardedness and fervor”) only to second-guess, backtrack, uncover exceptions. Orr’s off-topic jokiness, which spurs the taut comic routines of his journalism (and, unchecked in Beautiful & Pointless, produces a dinner full of dad jokes), is absent, replaced by a single-minded drive to let no easy reading stand. The result is not only a compilation of brilliant explanations for non-experts, on topics both poetic and not—Frost’s metrical theory of “the sound of sense,” or “the border of determinism and free will”—but also “a guide to modern poetry” far more welcoming, more wide-ranging, than Orr’s first book.

It’s also wrong—“wrong” in the way Orr’s subtitle informs us that “almost everyone” is wrong, subject to unacknowledged biases, overinflated claims, indigestible self-contradiction. As the book progresses, “The Road Not Taken” builds up into everything and nothing: on one page, it “captures the difficult essence of American experience”; on the next, it’s a funhouse of deception and distortion. Frost comes across as the century’s most prescient thinker, encoding contemporary philosophy and psychology into gnomic lines, but also as a modernist supervillain, bent on deceiving all audiences, himself included. That Orr never even tries to resolve these contradictions is not a demerit but this book’s great unspoken lesson. The further you get into “The Road Not Taken,” or any inexhaustible poem, the notion of any one unequivocally “right” reading seems more and more like an illusion. Depending on how you view it, Orr’s shrewd guide will teach you how to read Frost in many “right” ways, or how to read him spectacularly wrong. Thankfully, it doesn’t make a difference.