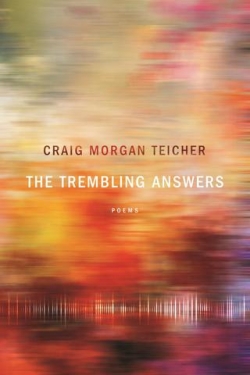 Straightaway, The Trembling Answers, the third collection by poet-critic Craig Morgan Teicher, looks to the literary past, first for wisdom:

Every turning toward is a turning away:
poets have always known the truth
of this.

I read
my book because

time in my home is senseless and
unbearable.

Unnerving coming from anyone, doubly unnerving if you know Teicher from the forthright, unstuffy reviews he writes for The New York Times Book Review and the Los Angeles Times. That critic turns us on to poetry; this poet, pincered between art and life, turns in on himself. Showering to hide from reading, binge-watching The Blacklist “to forestall the / interminable // chore post-shower of drying / my desperate and overgrown / hair,” Teicher suspects that what he’s truly avoiding is death; what he’s inevitably missing, life: “my daughter laughing, / my sighing son,” even the scant pleasure of these poems, of “crying out and crying over / my pain, my wondrous / pain.”

Teicher reads broadly, constantly, dependably: officially, the Poetry New Year begins when NPR publishes his massive preview of the year’s upcoming books. Drawn to the mid-century generation of Elizabeth Bishop and Delmore Schwartz (whose selected writings he edited), Teicher is most haunted, perhaps counterintuitively, by Robert Lowell, with whom he shares certain obsessions—history, family, and marriage, the bafflements of one’s own mind, all that wondrous pain—even if he has not one ounce of a Lowellian temperament, no Puritan pedigree, no manic depression, and no urge to cast himself as hero or antihero. Rather, as in the eerie duplications of “Self-Portrait Beside Myself,” Teicher stands off to one side, “admiring / my better self rather than / being him.” Lowell, as Teicher admits in a recent review, “came to represent all the things our multicultural contemporary literary conversation has tried to overcome,” but this only increases Teicher’s admiration for Lowell and his whole obsolescent generation—like him, they’re fellow rewriters, valiantly contesting time, always losing out.

Teicher’s plainspoken eloquence, restrained by hesitant line breaks and blunt blurtings-out, suggests a naturally shy person self-trained in explaining and expressing—being a critic and a poet, respectively. In The Trembling Answers—his most compact, most consistent, most self-skeptical collection—Teicher revisits that training in portraits of the artist as an aimless, introverted child, several given the same title: “Why Poetry: A Partial Autobiography.” (Why Poetry also titles a new book by poet-critic Matthew Zapruder. Zapruder hopes to solve that riddle for you; Teicher, for himself.) Teicher’s adult speaker, neurotically hyperarticulate, can trace himself to an equally apocalyptic child: “Does no one feel / the tectonic plates, magma, glaciers sliding? // You do, who’ve been anticipating death / since you were four.” Elsewhere, convoluted similes convey a child’s fumbling understanding: “I felt / as incorrect / playing baseball / as a bear cub moving in // with a family of turtles.” Teicher’s self-portraits, his answers to “why poetry,” are only ever partial—to their credit, Teicher thinks, who perhaps came to poetry

because it acknowledges right away
what scares me most,
how the line breaks before
the thought is done, how the line,
a partial thing,
is the measure,
and it’s never enough.

No critic as well-read as Teicher (or poet as dispirited) needs reminding that poetry makes nothing happen: “my lamentation,” he continues, “did not un-injure my son or / get me back my job.” Poetry won’t counteract those traumatic breaks, but Teicher’s halting lines can check his own frightening anticipation, his dread over what’s “never enough.”

Life and art and work entangle most ingeniously in the book’s centerpiece, a review-in-verse of Jean Stafford’s 1947 novel The Mountain Lion. Blurbese’s adjectival pile-ups (“this perverse, short, / lyrical novel, her second”) give way to swept-up summary, then to Teicher’s own fixations: “Fuck insight and analysis: / my heart is shot. Why / did she have to die? Why does // anyone? Why do you, do I?” For Teicher, Stafford’s novel is at once a handheld existential crisis—“my love,” he calls out to his wife mid-review, “nothing / happens, I’m afraid. I’m sorry”—and one more “all-but-forgotten” work: “No one reads Stafford anymore—I asked // on Facebook.” Granting Stafford and her characters some bonus shelf life, Teicher expects to meet them in literary oblivion: “we are with you, nowhere and gone. / Mostly we are forgotten, too.”

Even at his most bookish or self-involved, Teicher habitually turns to others—his wife, his new daughter, or his older son, who lives with severe cerebral palsy. Overtaxed while caring for others, guilty when left alone, Teicher ekes out poems from spare in-between moments, unanticipated grace: one starts “We’ve been lucky—March is over / and my son is still alive.” None of these quiet shared moments prepares you for his best, longest, most panoramic poem, “Edgemont.” Warily repopulating the Westchester town of his childhood, Teicher revises decades-old impressions. Was Edgemont “the hell that made me,” or a “lush suburban trap”? And “Was it really so terrible,”

those prism-perfect seasons, that place,
four-cornered and predictable, where I
learned to love sun-dust

carousing in the rays slanting
through my childhood’s gray
venetian blinds?

Fast-forwarding through school days, seasons, lives, generations, “Edgemont” becomes Teicher’s “Time Passes,” a collective elegy for a neighborhood “politely dying” and an upbringing that felt blandly generic: “the thin and dwindling mythology / of another middle-class family.” “But who really wants / to hear about it?” Teicher asks, seven pages in. “Where’s all / the poetry, one wonders.” It’s in the Lowell-like determination to take a second look—more distanced, more gracious—at a history formerly written off.

Turning from life toward art, Teicher inevitably keeps turning, coming to face life again. In “Letters to Brenda” (the poet Brenda Shaughnessy, his wife), he plays out a domestic courtship in public, in poetry: “We should / meet here, pulling these lines / over our bodies like a cool / sheet, cozy under the reader’s gaze.” The Trembling Answers ends with “Another Poem on My Daughter’s Birthday,” an occasional poem and an ode to occasions. Teicher begins as a critic, assessing both the day and his own style, inadequate to the moment: “I don’t know // how not to write darkly and sad.” Teicher’s writing—dark and sad, yes, but gently self-questioning—is no match for his joyful, unburdened daughter, who single-handedly lifts the poem into unembarrassed exclamation: “She / was born!” “She reminds me of now / and now and now,” the book ends, “I must learn / to have been so lucky.” Like our best poet-critics, Teicher ends by asking what he has left to learn. We should learn to be lucky for his self-reflective, self-revising work.