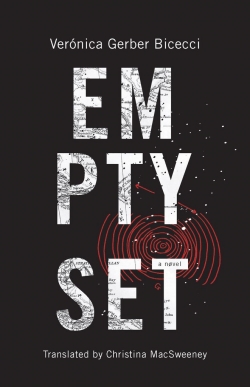 “There are—I’m certain of this—things that can’t be told in words,” explains the self-described “visual artist who writes” Verónica Gerber Bicecci in her novel Empty Set, translated from Spanish by Christina MacSweeney. Empty Set makes no attempt to tell only with words. Its fragmentary written vignettes are interspersed with sketches and explanatory diagrams that illustrate and, in some cases, build the understandings of its twenty-two-year-old narrator, Verónica. Acutely observant and persistently curious, Verónica’s voice powers the novel, guiding readers to travel its winding route with the same patience and wonder as its protagonist.

The book begins in Mexico City as Verónica’s boyfriend Tordo ends their relationship. This loss is not her first, and is only one of many in the book: the seven-year-and-ongoing disappearance of Verónica’s mother; the generational disconnections caused by exile; the holes left by broken romances. After the breakup with Tordo, Verónica takes on a job organizing the archive of a recently deceased writer, Marisa, mother to a graduate student named Alonso. Like Verónica’s parents, Alonso’s parents were exiles of Argentina’s military dictatorship. Verónica’s interest in learning about Marisa’s life through her letters and manuscripts is only rivaled in strength by her growing romantic interest in Alonso.

Even as Verónica explores the romantic loss she feels because of Tordo—and, in time, Alonso—her most powerful insights have to do with the confusion and loss inherent in political exile brought on by dictatorship, which she connects to the other losses in her life. Of her family, she writes: “In elementary school, I learned about my ‘nuclear family,’ the one that lives in Mexico, and that idea seemed plausible because I could imagine an explosion that had scattered us all around the world. That bomb, in our case, is called dictatorship. And the explosion, exile.” Her engagement with Venn diagrams is also connected to the control of logic imposed by authoritarianism:

Through them, you can see the world “from above”—that’s why I like Venn diagrams. There isn’t much documented evidence of this, but during the military dictatorship in Argentina, teaching basic set theory was prohibited in schools. [ … ] Venn diagrams are tools of the logic of sets. And from the perspective of sets, dictatorship makes no sense, because its aim is, for the most part, dispersal: separation, scattering, disunity, disappearance. Maybe what worried them was that children would learn from an early age to form communities, to reflect collectively, to discover the contradictions of language, of the system.

Verónica makes sense of her losses—like the disappearance of her mother, “a tiny, uncertain wound that grows a little larger every day”—with her set-making and the connections she can make between disparate events and emotions when she sees the world “from above.”

Empty Set is told out of order and in pieces, and there is a sense that this is the only way Verónica’s story can be told truthfully. She sees her life as a set of parallel universes: “My time was divided between that parallel Universe(UII), in which (I) coexisted with the absence of Marisa(Mx), and my original Universe(U), in which (I) coexisted with the absence of Mom(M).” In her “original Universe,” disorder was always the norm. As a child, whenever Verónica received information about her parents’ past, the stories came “in a disordered way, piles of disconnected anecdotes that were just pure chaos in my head.” As she finds meaning in these disconnected anecdotes and more, discovering that her so-called parallel universes actually intersect, the turn to synthesis is the reader’s as well as her own.

As it proceeds, Empty Set also builds a language of its own, going beyond words to offer an intimacy with Verónica’s thoughts through her drawings. A quarter of the way through the book, Verónica observes that “we’re all waiting for what we can’t see to finally appear.” A turn of the page reveals the words: “Here’s where this story ends,” accompanied by an illustration indecipherable to a first-time reader: By the end of the book, the meanings of each of these Venn diagrams, shapes, letters, and shadings has been made clear—what we couldn’t see originally has finally appeared. Thanks to Verónica’s heartfelt and often funny narration, the wait was well worth it.

Christina MacSweeney is a masterful translator, which will come as no surprise to anyone who has read her English translations of Valeria Luiselli, Daniel Saldaña París, and others. In an afterword that takes the form of an email conversation between author, editor, and translator, MacSweeney offers some insight into one of the most difficult decisions in translating Empty Set: how to treat the personal pronoun, which is much less prevalent in a first-person account in the Spanish language than it would be in English. But this is not the only problem posed in translation that MacSweeney had to solve to deliver this engrossing and clever book into English. Whether it’s by bringing hidden acrostic messages into English or finding approximations for Verónica’s play with language, MacSweeney shows her skill time and again, placing her squarely within the set of great contemporary translators.