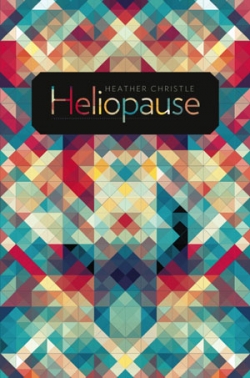 “I did not know / when I began,” Heather Christle writes in Heliopause, “I’d fill these poems / with so much information / which saturates / my life.” Heliopause, rising star Christle’s fourth book of poetry from Wesleyan University Press, addresses the information—often tragic—that saturates contemporary life, marking a notable shift in the author’s focus. Christle’s earlier work garnered her a reputation for rapid and peculiar writing; Heliopause attends to current events with a new and unmistakable gravity.

Christle’s first three collections of poetry all appeared in a span of just under three years, with the result that they exhibited strong similarities in subject and tone. These earlier collections explored a whimsical, nonspecific world through an absurd, rapidly shifting voice reminiscent of James Tate. But it has been three years since Christle’s last book, and her attention has shifted: her new subjects include September 11, the 2012 Aurora shooting, and chemical warfare. “Where I see a general blur you see particular shapes / and this is why the game to you must be called tragic,” she writes in “Dear Seth.” The general blur of her earlier vision has given way to the particular shapes of life in post-9/11 America.

Heliopause is anchored by five long poems, including “Elegy for Neil Armstrong,” an erasure of a transcript from the first moon landing; “Dear Seth,” a sequence of epistolary poems; and “Disintegration Loop 1.1,” a response to composer William Basinski’s The Disintegration Loops. Almost without exception, the long poems constitute the strongest work in Heliopause; in them, Christle pushes towards paired understanding and unknowing. “Disintegration Loop 1.1,” a poem sparked by weeks of watching and re-watching Basinski’s video of smoke billowing from lower Manhattan during the last hour of daylight on September 11, 2001, masterfully reflects on the implications of listening and watching.

the words of another

Short lines and compact images invite multiple meanings like the diminishing returns and returning diminishment that the speaker experiences with each re-watching. Echoes similar to the smoke and domed building abound: the “bare branches” of a tree become “a cracking explosion // no eye could resist,” a ghost of the destruction the video implies but doesn’t capture. “Disintegration Loop 1.1” reenacts the work of becoming an echo chamber that gathers, repeats, and creates anew.

A focus on headline tragedies could easily devolve into polemics, hysteria, or despair, but Christle avoids this by folding in a speaker’s individual experience. “How Long Is the Heliopause,” another long poem, invokes the official, authoritative voice (“they say”) that appears throughout the collection:

Christle locates the poem in time with details drawn from pop culture (“the year after the year / when people with cable began / to pile Christmas lights into glass jars”) and front-page headlines (“the year of evidence of chemical warfare / clear or uncertain / depending on where you live”). Layering these details—sincere, flippant, somber—she invites consideration from multiple viewpoints.

Heliopause signals a new direction for Christle, one that she embarks upon skillfully. Several short poems in the collection employ a less compelling, quirky approach (“Flowers Are Also Letters” concludes: “Do I? / Do I ever! / O e ! / O i ! / O e i e i o !”), but overall, the collection speaks in a direct, thoughtful voice that is difficult to dismiss. In “Some Glamorous Country” Christle writes,

the things I have done
in my name

In Heliopause, Christle turns to speak about the terrified world in poems notable for their clear, earnest, and committed voice.