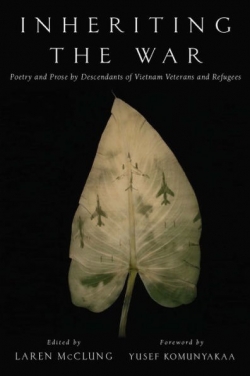 In this anthology of writings by the descendants of Vietnam War veterans and refugees, Viet Thanh Nguyen, winner of the 2016 Pulitzer Prize for his novel The Sympathizer, offers an essay in which he recalls his arrival in the United States. He was four years old and had been sent with his parents to a refugee camp in Pennsylvania. As a condition of the resettlement, the boy first had to be taken away “to live with a white family.” Although he was eventually reunited with his own mother and father, Nguyen declares that the experience of being separated from them “remains an invisible brand stamped between my shoulder blades.” He writes that he has spent his life “trying to see that brand, to make sense of it, to rework it into words that I can speak to myself, that I can share with others.” This meaning-making process is at the heart of the writings collected in Inheriting the War. Putting the matter another way, this book presents us with an invaluable record of what the poet Terrance Hayes calls “the long shadow of war.”

There are many such long shadows in this book. First among them is an enduring and unbearable gap between those who survived the war and their descendants. For both American and Vietnamese offspring, the veteran or refugee who has experienced the war often seems emotionally remote and at times behaviorally bewildering. Consider Teresa Mei Chuc. Her father had been a captain in the South Vietnamese Army. As the war ended, Chuc and her mother emigrated to the United States, but her father was imprisoned in a “re-education” camp for nine years. When the family was finally reunited in the United States, Chuc’s father seemed a stranger to her. In an excerpt from her memoir, The Year of the Hare, Chuc tells us that her father had endured beatings, starvation, and torture; now in the United States, he ruled over the household with an iron hand. Clearly struggling with unresolved and little-understood post-traumatic stress, he seemed to her “impenetrable.” At times he imposed painful physical punishments on her, punishments that echoed what had been done to him in the camps. “I lived with Baba,” she writes, “but pretended he didn’t exist. Otherwise, I couldn’t have survived.”

Alienation between veteran and descendant is not always this extreme, but in many of these writings a sad but inevitable perplexity exists in even the most empathic and loving relationships. In Lily Katherine Bowen’s poem about her father, “Falling,” the poet recalls terrifying childhood nights when she watched her father being consumed by combat flashbacks. She saw her mother holding her father, trying in vain to comfort him, his “sleep robbed by unforgiving ghosts.” Similarly powerful revenants haunt many of these pieces. Dealing with them is the work of the veteran or refugee; for the younger person, the hard labor is to bear witness to this aftermath of war.

For example, in The Ticking Is the Bomb, Nick Flynn writes of his stepfather, Travis, a Vietnam veteran who, like Bowen’s father, carries a significant burden of post-traumatic stress. Flynn recounts how he and Travis traveled to Vietnam as part of a group of returning veterans and their children. On the itinerary is a visit to the village of My Lai, where American soldiers massacred over five hundred unarmed civilians. At one point, Travis approaches a middle-aged woman working in the fields. “From a distance,” writes Flynn, “I watched Travis watching her.” When Travis learns through a translator that the woman was a survivor of the massacre, he bends down before her, takes her hand, kisses it, and asks her “to forgive him, forgive America.”

Such witness-work becomes a purpose unto itself. The poet Philip Metres’s father was a combat soldier during the Tet Offensive. In his essay, “The Things They Carried That We Carry,” Metres says, “war always comes home.” In his case, this means that all his own writing since then “has been pitched against the forces of war—the dislocation, trauma, and pain that trail in their wake.” You can hear a similar sense of purpose in “The Examples,” a poem by the Hanoi poet Nguyen Quang Thieu. Here, the poet is imagining the immense number of Vietnamese women widowed by the war: “Like a lunatic, I stand and count them, example after example, I count them.” The poet Ocean Vuong came as a child to the United States during the 1980s exodus from Vietnam. So, too, did his slightly older uncle, who committed suicide in 2013. Whatever the specific cause of his death, the wartime uprooting surely played a part. In an elegiac essay for his uncle, Vuong captures the feeling of being a witness to suffering and loss. “When someone dies,” he writes, “their silence becomes a held note, a key on the piano pressed down for so long it becomes an ache in the ear, a new sonic register from which we start to measure out our new, ruptured lives.”

New registers of feeling are what these writings help us to hear. Across a wide variety of generational, racial, and cultural divides, these writings document the deliberate labor of empathic understanding. That is the one ray of light among the long shadows of this war. Terrance Hayes, for instance, sets out to learn more about the combat death of his biological grandfather, a man he never met because of his family’s fragmentation. Hayes comes across a history of the battle in which his grandfather died, and in it there is a report that Hayes’s grandfather “begged” for a medic. Hayes says, no, not this proud black man who was dying for his racially troubled country. He may have asked for a medic, he may have demanded, but he didn’t beg. In another essay, “The Boneyard,” the journalist Ben Quick visits an airplane “graveyard” in the Arizona desert, hoping to see the planes that were used to spray the jungles of Vietnam with Agent Orange. Quick’s father spent a year in those jungles, and the genetic harm was passed on to his son, who was born in 1974 with a left hand that is “almost round, and at first glance, fingerless.” Quick recalls that as a boy he overcompensated for and sometimes camouflaged his disabled hand. But the most important consequence of this “inheritance” has been that it gave him a sense of identification with “the children of the damned,” the thousands of Vietnamese born with severe damage done by dioxin.

Perhaps the ultimate significance of these writings is to remind us that, whether we know it or not, we are all inheritors of the wars that have come before us, and in some way are obligated to try to understand what that inheritance means. We could take the experience of Hanh Nguyen Willbond, the adopted Vietnamese daughter of the American poet Bruce Weigl, as a model. Willbond tells the story of how she came to know her father via his poem “Song of Napalm.” As a youngster, she had not understood the poem and seemed not to pay attention to it. But a few years ago it was set to music, and for the premiere concert her father asked her to recite the poem in Vietnamese and English. Suffering a little from stage fright, she plunged into the poem’s horrific description of a napalmed Vietnamese girl and began to understand the images that had continued to haunt her father over a lifetime. She also had to acknowledge the poem’s bleak truth that the violence of war lives on, not only in the minds of the traumatized survivors, but especially in the descendants. “We are all living proof,” Hanh concludes, “of the consequences of war.” The writings assembled in Inheriting the War bear witness to the far-reaching truth of her statement.