Skip to content
The Gun My Sister Killed Herself With 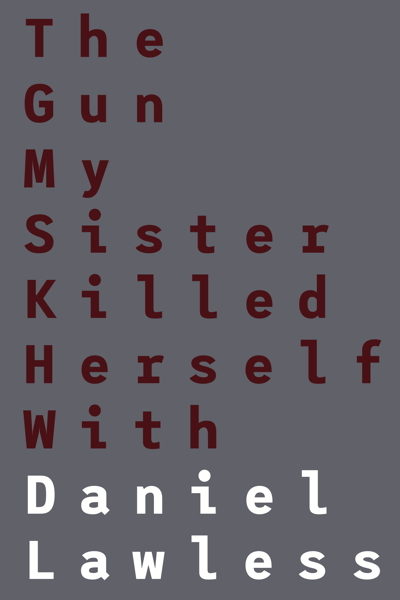 The Gun My Sister Killed Herself With

The world in Daniel Lawless’s poetry is not a safe place. Threats are everywhere: within the family, on the streets, in high and low social strata, and deep within one’s own mind. For example, in “The Old Woman Hit By a Truck,” the poet responds to a photograph that captures the aftermath of a terrible accident. He notes the woman’s broken glasses, her head turned sideways, and her “blood-flecked checked skirt hiked up.” No one has stopped to help; kids seem to be running from the scene. The worst, however, is yet to come. The day after the accident, someone posts this photo online. An iPhone has been photoshopped into it and placed under the old woman’s ear. The whole thing is now captioned “Out of Service.” The ghoulish wit declares to the world, writes Lawless, that something is missing within this meme-maker’s soul. The parody image says only this: “I am open. I am empty.”

A sense of emptiness haunts this collection as a whole, and nowhere more so than in the title poem, “The Gun My Sister Killed Herself With.” This poem consists of a series of layered recollections, fragments really, concerning the suicide of the poet’s older sister when he was ten and she was sixteen. Approaching the traumatic memories from an oblique angle, Lawless begins by telling us that the weapon was “a cubit long and weighed half as much / As an average newborn baby.” No one knows where she bought the gun, and no receipt was ever found. There was neither a suicide note nor a farewell phone call. The poet has clearly tried to learn of her final minutes, because he can report two skimpy facts: his sister had a coffee at a McDonalds and spoke with someone outside a 7-Eleven. He also reports that their mother was hanging out the wash when she was told what had happened. Her scream was heard two blocks away and sounded, Lawless says, as if a cat were being killed. The suicide itself is not described, but the accumulating details define what a sculptor might call a negative space in the poem, and it suggests that, for the poet, his sister’s death is not only difficult to talk about but feels like a hole in the fabric of being.

There are many missing people in this collection. In “Dear Dewi,” the poet writes to a friend whose son has been swept out to sea by a tsunami. In “Books and Correspondences: A Short History of Decay, E. M. Cioran,” the poet tells of a neighbor’s son who, as a prank, climbed a water tower one night and fell in, drowning. Inevitably, the subject of mental illness anchors this book, as it seems to have plagued the poet’s family throughout his childhood. In “View From a Treehouse,” Lawless recalls witnessing his schizophrenic older brother as he was about to be committed to an institution. Addressing his brother, Lawless writes:

As Mom and Dad guided you like a blind man
Into the back seat of the Green Dodge.
Your fifteen-year-old face freckled
In the window with sleet, fat and pale, wearing
That everything-inside-crouched-and-wary look
Tim Tam got at the vet, maybe trembling, whatever
The onset of schizophrenia looks like
To a ten-year-old who views it from a tree-house
Through a spy-slot sawed with a steak knife into a gap
Between two sheets of plywood spiked with nails.

Lawless says he remembers feeling nothing back then, but now, these many years later, with the memory so permanently etched, it is clear that he was profoundly shaken by what he saw.

Surprisingly, the poems are neither maudlin nor morose. Lawless does not approach suffering with hushed, confessional solemnity. He does not indulge in self-pity, nor does he present himself as martyr. This is not a book of lamentations. Instead, these poems have a restless emotional energy and raw vitality. In addition to mental illness, Lawless ranges over a wide terrain: from American freeways and road rage to a mangrove swamp and writers’ conferences; from a seaside restaurant in Thailand to an archaeological dig in England. We meet Velda the fortune-teller, a pedophile priest, and a dead squirrel (twice). There are portraits of the poet’s parents, and there are homages to Rilke and Kafka. Lawless’s diction goes up and down the scales, from the colloquially blunt to something spare and gently evocative. One can hear the bluntness in the title of the book, and one feels the evocative in this untitled poem, quoted here in its entirety:

The cumulative effect is the creation of a voice that is based on, but reaches beyond, its understandable fear and trembling. If experience is a whirlwind of “violence, anguish, absence,” as Lawless says in “Transmission,” then this voice deliberately, if not eagerly, turns to face it. Lawless wants to know what the whirlwind has to say for itself, if anything. It truly is no accident that we hear in these poems some long-distance echoes of Job.

“View from a Treehouse,” for example, begins with the onset of his brother’s schizophrenia, but it ends with Lawless demanding that the “Great Whoever” answer to him for what has been done to his brother and to himself. Lawless asks the deity outright, “whatever / made you think you could get away with such horseshit?” Lawless tells us in “To David” about a childhood friend’s alcoholic father who once climbed onto the roof of a small windmill in a miniature golf course and from that height cursed everyone around him, including his wife and children, saying they could all “kiss his ass.” While cursing everyone, the drunk looks up to the sky and spreads his arms out wide, “As people do when they wonder Why, / Why about something and you know it, / That gesture, even if you are passing by in a car.”

The Gun My Sister Killed Herself With presents us with a gallery of human beings caught in predicaments that make them want to look up to the heavens and wonder, Why? Though the gods may be absent, dead, or silent, and though there may be no answer, Lawless suggests that there continues to be some shred of hard-earned dignity in asking the question.