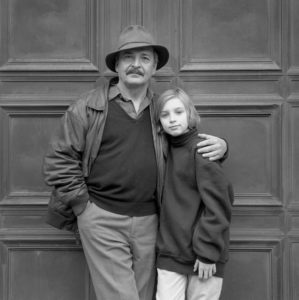 Stratis Haviaras and his daughter, 1992. Photo by Mariana Cook, from her book Fathers and Daughters (Chronicle Books, 1994). Reprinted with kind permission of the artist. © Mariana Cook, 1992.

We are deeply saddened to learn of the passing of Stratis Haviaras, founding editor of Harvard Review. Born in Greece in 1935, Stratis’s remarkable career brought him to Cambridge by way of Athens, New York, and Charlottesville. A writer, editor, teacher, and mentor, he was a literary citizen in every possible sense. He was the author of several collections of poetry and novels in both English and Greek, including When the Tree Sings, which was shortlisted for the Natiοnal Book Award in 1980. At Harvard, he was curator of the Woodberry Poetry Room and founding editor of Harvard Review. Upon his retirement in 2000, he returned to Greece, where he taught in the European Center for the Translation of Literature and the National Book Center of Greece and established a creative writing workshop for the Center for Hellenic Studies of Harvard University. Stratis remained a friend and contributor to Harvard Review, and we were honored to publish some of his translations online, as well as a short story in our anniversary issue, Harvard Review 50. We offer this memorial space for friends and colleagues to remember his life and work.

Stratis—I could make long sentences listing all the ways he brought his talent, dedication, and joie into our Cambridge literary life through the ’80s and ’90s. He was, lest we forget the range of his talents, novelist, curator of the Poetry Room at Harvard, founder of the long-lived writer’s group that met there on Sunday nights; founder, too, of Harvard Review, which he edited and ushered from staple-bound to perfect-bound. I knew him in all of these capacities, but right now I am picturing him in his backyard on Clinton Street, aproned, hosting—with Heather Cole—one of their fabulous summer lamb roasts, which every year pulled in writers and kindred souls from all parts of his extensive tribal network. He loved to clink the glass, make the toast, and wield the carving knife—which in his hands was a symbol of largesse.

For Sunday evenings and new writing read around a long table in the Poetry Room, for the founding of Erato and then Harvard Review, for the testing and weighing of poems fresh from their envelopes, for the faith you had in words and books, for the hope that there would always be new ones needed, for the translations you did, and the tape recordings you made, for the array of readings you hosted, for teaching us about a heroic age when the trees sang, and for all you gave to so many writers, including me, this deep bow of thanks.

During my years at Harvard, Stratis was always at work improving conditions for the Poetry Room. Some of this work was invisible to readers, such as a better independence for the Poetry Room in the administrative structure of the Harvard Library System, or the resolute modernizing into digital form of the precious aural resources of the Room still in tape or LP form, which were thereby preserved for future listeners. But if those were his invisible accomplishments, he was visible daily in the Poetry Room assisting many visitors and students. He wholly believed that the room should remain available to the general public, as it continues to be. He applied for, and won, many grants for the preservation of library materials, and, since he was himself a poet, understood fully the value of such a room—open to all—in any library system. Stratis invited scores of poets—foreign as well as American—to read in the Poetry Room and arranged lectures as well, serving as host afterwards if a celebratory gathering was planned. I’m especially aware of what a good friend he was to Seamus Heaney during Seamus’s years at Harvard, and of Seamus’s affectionate regard for him. Stratis brought to the Poetry Room a wide and deep knowledge of classical and European poetry, espousing poets that many of us had not read till he sponsored a reading by them. He will be long remembered by all of us.

I first met Stratis when he worked at Widener and came to poetry readings around Cambridge. When the Tree Sings knocked me out. To have this brilliant charismatic writer at the helm of Lamont’s Poetry Room was thrilling. Stratis was a generous friend to me (I think my second or third published poem was in Arion’s Dolphin [which he launched at Goddard College in the 1970s]) and to so many other writers, He enriched the literary community here for years in ways for which we should be forever grateful.

Each of the journals that Stratis founded seemed to get bigger and bigger. And with time and distance, so did he. And his Cheshire Cat smile (what delicious secrets was he always preparing to spring on us?). When he moved to Greece, we missed him a lot. He was a great spirit, a welcoming editor, and a wonderful writer. We’ll miss him now more than ever.

You have to start with shit, Stratis said. He’d instructed me to buy a fifty-pound bag of cow manure, and he was now spreading it in my back yard. Writing, gardening—it’s the same for both. He was planting two pepper plants, some summer squash, zucchini, and two tomato seedlings that he’d brought over from his own garden half a mile away. As he worked, he held forth on the relationship between gardening and creativity, how plants and literature intertwine. Your writing will change now, Helen, he said.  You will see interesting things start to happen in your work, once you have a garden to tend to. He did not think that living in an apartment, as I’d done for the past eight years, was good for literature, and he took it upon himself to lead me into the light of true inspiration. Well, Stratis certainly lit me up, all right. He was mentor, philosopher, friend, and co-conspirator; he delighted in bucking established norms, both in his workplace and mine. It’s ok to have a job, he assured me, but writing must always come first. Where would I be, if not for Stratis? He showed me how to love the world and to write without fear, without restraint, and it always starts with shit.

In September of  2001, Sally and I led a small group of travelers to Turkey and Greece on a trip sponsored by Harvard Alumni Travel. It was a last-minute decision for us, as the original leader had withdrawn in the wake of the 911 attacks. I had the presence of mind to contact Stratis, who had returned to Greece, and to invite him to meet and talk to the group when we arrived at the Grand Bretagne Hotel in Athens. It went very well. Dapper in his casual way, urbane as usual, Stratis mingled easily with the dozen or so travelers having drinks amid the storied opulence of the Grand Bretagne. (It had been the headquarters of both the Nazis and the Allies in World War II.) Then he spoke. I recall that he read a couple of his poems and then talked about contemporary Greece and answered questions. It was so far above the usual canned spiel of local guides that I had a problem on my hands: expectations had been raised. The next morning at breakfast several of the group asked after Stratis. They were more than a little disappointed to learn that he would not be coming with us when we visited the Parthenon and the National Archaeological Museum before going on to the Peloponnese. Now I feel like one of those alumni travelers. Where is Stratis? Will he not join us for the rest of the journey?

I was present with Stratis Haviaras at the creation of the Harvard Review with the premier issue published in the spring of 1992. I was listed as publisher along with Richard Marius and Stratis, while Stratis was the editor. After Seamus Heaney was awarded the Nobel Prize for Literature in 1995, Stratis the following year issued a Harvard Review monograph on Seamus titled “A Celebration,” which Stratis edited and to which I contributed an essay on “Seamus Heaney’s ‘Villanelle for an Anniversary.’” I was proud to serve as publisher until my retirement in 2013.

Stratis Haviaras occupied a rare space in American letters, and he filled it with a light that was compounded of soulfulness, shrewdness, and affection for friends and words. It isn’t simply that he opened up the Poetry Room at Harvard to the outside world, internationalizing it, but that in doing so he helped change American poetry—he’s a big part of the secret history of American poetry over the last fifty years, the true history of poets making their way in this beautiful, benighted country. The Poetry Room in those years was a clubhouse for all sorts of American poets, a place where all the factions felt welcomed.

The magazines Stratis started—Arion’s Dolphin, Errato, and Harvard Review—were essential to me as a younger writer. His nose for the real thing always seemed infallible, capacious in its appreciation of every style from the crude to the cosmopolitan. His own work, both poetry and prose, is lyrical and generous at all times, but never without a complex precision and keen estimation of the consequences that come from living how and where we do. I first heard him read from his writing at the Fine Arts Work Center in Provincetown in 1984—a good five years before I actually got to know him. It was the year The Heroic Age was published, a book that blew me away when I finally sat down with it.

Stratis’s kindness and generosity are legend. On a personal level, I’ll just say that he picked me up at two very low points in my life—there was a modesty and casualness to the way he did it, no self-importance. I’m still grateful for what he did, for his friendship. His faith in my work as a writer and editor changed many things for me. It changed me. So many others I know would feel the same.

My immense sense of loss upon hearing of the death of my dear friend Stratis immediately took the form of a direct address to him: “How much of this, that I am feeling now, you’ve suffered and shared. As soon as I heard, I thought of your murdered father: how that endless grief gets to stop now. Only to ache on in our memories … yours is free. Ave atque vale, best of friends.”

Anyone who would like to add a comment to this page may email us at info [at] harvardreview [dot] org.