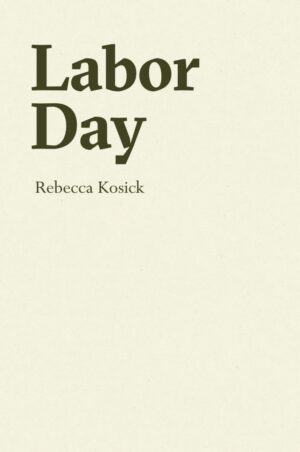 The title of Rebecca Kosick’s debut poetry collection, Labor Day, sets forth its two key concerns: work and time. The book unfolds in the postindustrial landscapes of the Upper Midwest, registering a double loss—that of economic decline in the Rust Belt and that of the speaker’s absence from the poems’ setting. Across Labor Day’s fifty-six numbered sections, Kosick considers the flows of labor and duration, meditating on the “monster of memory,” language, and sentimentality (“Otherwise known as / the slow corrosion of city”).

The thematic engine of Labor Day is the act of mourning, prompted not only by the physical spaces that the speaker has left behind, but also by the layers of dust on memory that make it difficult to distinguish between real and counterfeit experience. In poem 7, the speaker is “back in / the Midwest,”

Reading through old trees and metal

The speaker’s return to this familiar space has revealed a landscape opened up like a text. But the passing of time has made a ruin of this text, revealing an uncanny “that” in the trees, something that makes the forest simultaneously “fake” and “real.” In a later poem, Kosick writes that “terror is a fealty and can’t but overcome / salient forgeries / archival orders.” There is an uneasy equivalence between forgery and archive in Labor Day—Kosick suggests that memories are “real” in that they carry symbolic weight, but leaves their status as either a reliable record or a “salient forgery” in question.

With such skepticism toward expressions of the past, it follows that the main source of tension in Labor Day results from the speaker’s attempt to reckon with language, a ruined medium. She shows the language of memory as a sort of predictive text, resistant to its user’s agency. Such scriptedness prevents a direct encounter with memory:

Because memory is mediated by language, the speaker observes that “we never get to     the things themselves / so we / only near them.”

Exploring the relationship between time and work, Kosick sets economic terms alongside temporal ones, revealing how time is a by-product of the capitalist organization of labor. How, then, can language respond to time’s ruinous effects under the strain of capitalism’s demands? The inseparability of language and memory, in the end, results in the destabilization of both:

This cyclic motion sheds some light on the book’s serial form—Kosick sees time as “repetitive,” and its repetition brings erasure both to the physical and the remembered landscape. Like the land, words are ruins that “must salvage themselves / out of the fog.” Similar to Bernadette Mayer’s Midwinter Day, the serial form of Kosick’s book becomes both a struggle against and an enactment of its own erasure.

After all, language is skewed by time. We encounter what sounds like garbled slogans in poem 33: “It is the end of the energized now / and   listen is a break for the ladies / and fiscal freedom.” The effect is that of interfering signals, as if the warped memory of an ad campaign is intruding on the speaker’s present state of mind. Other poems, like poem 52, register an even greater degree of linguistic damage with deliberate misspellings, contorted syntax, and use of homophones:

Will eligiblilty figure outtage?
whatever the slippage
the vocational discouragement

Phrases like “junky yard” create the impression of a child’s speech, which appears elsewhere in the collection with words like “slidden,” “umteem,” “someonce,” and “cept.” Including speech that could easily belong to the very young or the very old once again contributes to the collection’s sense of uncertainty. It seems that if memory is a byproduct of language, any alteration to one will be reflected in the other.

Layered with time and space, littered with the ruins of memory and language, Labor Day provides more questions than answers. Yet despite the “slow devastation of waves and loss of memory” throughout the collection, the speaker “is expecting to one day / form a recording or newness in hope.” Writing toward an unattainable reality and against the repetitive erasure of time, Kosick still finds possibility in iteration: “but I am invested in the other inventive erasures / and I believe in futures.”