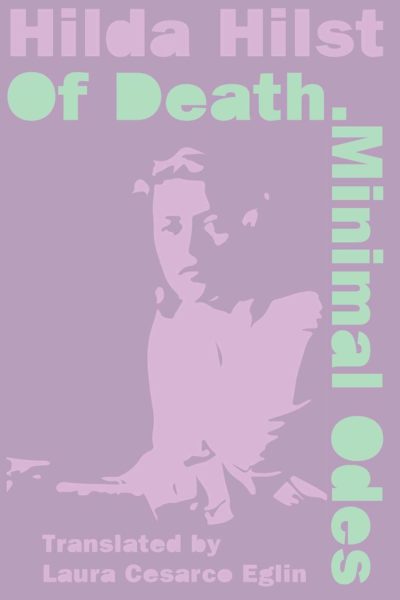 Writing on what she terms “last-word poems” in Dying Modern: A Meditation on Elegy, Diana Fuss claims that in the overlapping zone of deathbed utterances and poetry, “the power of last words derives precisely from their lastness, from the structural impossibility of dialogue or debate.” Although Brazilian poet Hilda Hilst went on to write many subsequent books, her 1980 collection Of Death. Minimal Odes makes central this tension between finality and futurity, presence and posthumousness. In an award-winning translation by Laura Cesarco Eglin, Of Death. Minimal Odes provides a much-needed entry point into Hilst’s poetics of duration, desire, erasure, and materiality.

Of Death. Minimal Odes consists of four movements. The first, “Watercolors,” is a series of six poem-and-painting pairs featuring a surrealistic juxtaposition of text and image. The second, eponymous section occupies the bulk of the book, followed by two shorter sequences: “Time—Death” and “In Front of You. In Vanity.” The centerpiece of the collection is the forty “Minimal Odes,” which take the form of short lyrics, paradoxical in their simultaneous brevity and iterative excess.

The 2019 Best Translated Book Award jury took notice of this tension in their statement: “These are poems that lure readers well beyond their best interests, regardless of whatever scars might be sustained. In language that is twisted, animalistic, yet at times plain, Cesarco Eglin reveals another layer in the work of this Brazilian great.” Although the jury statement is intended as praise, it seems to offer a moral judgment and implies that Hilst’s poems are both lacking and excessive. It might be more accurate to contend that the “Minimal Odes” section challenges established genre borders by staging the proliferation of minimalistic lyrics under the maximalistic sign of the ode. Most importantly, these odes are apostrophic—they speak directly to death, but in so doing they uneasily triangulate the speaker, the reader, and death (the mostly mute auditor). Though they are not necessarily “last-word” poems, Diana Fuss’s construction seems apt for describing these odes: “Last-word poems are horizontal and vertical at once. With their final words, the dying console the bereaved but always with an eye toward Heaven.” In Hilst’s odes, the constant appeal to “you” interpellates the reader as both spectator and participant, further troubling assumptions of public and private speech in the realm of the lyric.

The apostrophic address of death is not a new feature of lyric poetry, but what distinguishes Hilst from other poets writing in this mode is that Hilst’s version of death never feels like an abstraction. She insists on death’s materiality while allowing for its various embodiments: a “little mare” or a “child / on a shard of china” or a “lilac and mauve fish.” At times, this materiality also extends into the realms of queer desire and eroticism. In Ode II, the speaker marks death as feminine: “May you traverse me carefully, ethereal / May I know you licit, material // two strong women / in their difficult hour.” Here, Hilst’s use of the subjunctive mood forecloses the speaker’s wish for “licit, material” knowledge even as she utters it. Ode II closes by following the desire for knowledge to its conclusion: “And to you, knowing you / may I become flesh / and possession / like men do.” In this surprising turn, the eroticized encounter with death does not erase the speaker, but instead allows the speaker to “become flesh,” to fully realize her own materiality.

Ode V expands upon the dialectical relationship between the speaker and her death, further articulating the complex exchanges of power and agency:

Minimally turgid
How will you come, my death?

Intricate. In knots.
In a passageway of lines.
How will you come?

In the snails, in the seeds
in sepia, in biting pink
how can I shape you?

How will you take me?

The question that opens this poem (“How will you come, my death?”) conveys what we might expect in a typical poem of this kind: a passive speaker awaiting the unpredictable arrival of death. As the poem continues, “how will you come” morphs into “how can I shape you,” indicating a co-constructive relation between speaker and auditor. The end of the poem returns to a pursuer-pursued dynamic, though the penultimate stanza filters the encounter through quasi-erotic language and a flirtatious, taunting tone. The reader is left with ambivalence about which figure ultimately retains control.

Of Death. Minimal Odes also warps time into impossible folds, staking out a kind of paradoxical pre-posthumous queer time. In Ode VII, Hilst writes, “You’ll lose from me / all the hours // because you’ll only take me / at a certain hour.” These lines demarcate a zone where the implied futurity of poetic utterance (the poem that outlives its author) nervously coexists with the poet’s ever-present but not-yet-arrived death. In her translator’s note, Cesarco Eglin points out that “while odes usually sing to someone or something that is generally not present, Hilst’s odes call death into presence and into the present.”

Cesarco Eglin, an accomplished poet herself, brings an expert touch to these poems. Her translation captures the intensity of Hilst’s pressurized language, which presents an extra challenge in moving from rhyme-heavy Portuguese to English. The result is a thickly textured, intimate register of speech—a close inspection of “morte minha,” my death.

“Writing is dying, a way to experience, over and over again, one’s own sudden, inexplicable disappearance,” Diana Fuss argues in Dying Modern. But Hilda Hilst’s poems offer another possibility. By addressing death head-on, Hilst’s speaker succeeds in infinitely extending the poetic act:

They’ll say:
a poet and her death
are alive and united
in the world of men.