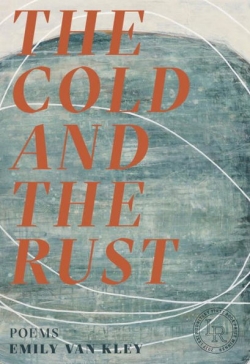 The Cold and the Rust

Beginning with its title, Michigander Emily Van Kley’s debut collection The Cold and the Rustpits the reader against two elemental forces: one sterile and unflinchingly nonhuman, the other demonstrating vitality even while it corrodes. Van Kley sources her title from a passage in “Premises” in which the speaker, in her role as Kmart security guard, wrestles a “reedy punk” to the ground: “The kid’s nose / bloodied against packed snow / and ice: accidental. The cold / and the rust smell.” Through its dyads of cold and rust, bullet and animal, beauty and violence, “Premises” lays the groundwork for a book that circles the idea of a “hometown,” albeit with a critical eye on the abrasions of rural, white, working-class, heteronormative communities.

At first glance, The Cold and the Rust presents an easy dichotomy between the tenacity of the nonhuman and the fragility of the human. However, Van Kley’s poems often reveal a precarious intersubjectivity between the two. In one of the book’s most arresting poems, “Lacustrine,” the speaker witnesses the resurrection of the family goldfish, found frozen in their tanks after a vacation:

Our pets
terrible sculptures of themselves,

in the midst of their daily
ministrations, black suckerfish

Released from their icy stasis, the fish swim to the surface. Their lack of “reason to doubt / the heavens would open // & food begin to fall” serves as an uncomfortable reminder of the incidental violence that mediates the interspecies relationships that appear throughout the collection.

Perhaps no symbol better encompasses the difficult entanglements of capitalism, violence, and landscape than the sea lamprey, an image that dominates the poem “Superior.” In this poem, Van Kley casts the lamprey as the foil to the ancient lake sturgeon on which it preys. An invasive species, lamprey entered the Great Lakes in the late 19th century as a result of newly constructed shipping channels. They survive through parasitism, typically causing the death of their native host. “Superior” takes as guiding symbols the intrusive, alien lamprey and the stoic but doomed lake sturgeon. In a series of parallel narratives, Van Kley addresses her parents’ arrival in Lake Superior from the “Sioux Center trailer they abandoned,” as well as the slow demise of industry in the region. By the end of the poem, the speaker’s parents “became // as those who lived at water’s edge, / who dressed in sheepskin mittens // & boiled wool mufflers, / shoveled snow regardless of heart // conditions, & didn’t make / a fuss out of waiting for spring.” However, the poem thrives on Van Kley’s trademark reticence, refusing to disclose whether the tenacity of the humans in the poem resembles the lamprey or the sturgeon.

In the strictly human realm, The Cold and the Rust embraces the paradoxes of those who inhabit the Great Lakes region. Stories of mine disasters, Kmart monopolies, snow-machine wrecks, and alcoholism tinge the setting’s pastoral image with the unforgiving exigencies of labor and damage wrought by the landscape. Most striking is a group of poems describing the speaker’s experiences with high school athletics, in which the violence of heteronormativity collides with the ecstasy of pure physicality. In “Varsity Athletics,” for example, the volleyball coach tells his players to “hit limp-wristed, // so your hand snapped down. / Like a faggot,” an aggression that is later mitigated by the visceral demands of the cold:

While elsewhere in the collection, winter seems like a hyperobject—too massive in scale and temporality to comprehend—here, it seems to re-center the speaker in a bodily certainty. The storm “cancel[s] specificity,” allowing the speaker to move inconspicuously through the city and reducing this world to the snow and the body within it. In the face of the heteronormative structures that surround the speaker, moments of relief occur in unmediated encounters between speaker and landscape: “my tracks // behind covered over, senses / scoured in lake-effect wind.”

To call The Cold and the Rust a paragon of regionalist writing would be unfair, as its scope and relevance extend far beyond the Great Lakes. And yet, one of the book’s strengths lies in the way that Van Kley explores Michigan’s distinct topographies while attending to the intersections of rurality, whiteness, sexuality, and class. Above all, this collection proposes that place is not a static zone to be inhabited, but vice versa. Like the lamprey in Lake Superior, the Kmarts, tributaries, and high school gyms come to occupy an uneasy and unyielding space in the speaker’s interior life. Ultimately this serves as both an acknowledgment of nostalgia for one’s home and a recognition of nostalgia’s futility:

How self-
important, the notion

that a place can be left,
a person return