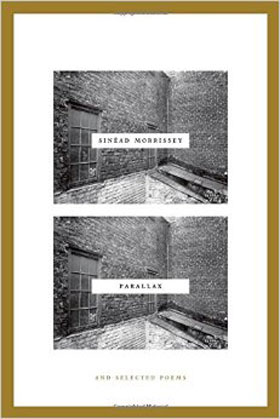 For over a decade, Sinéad Morrisey has been fêted as the voice of Northern Ireland’s post-Troubles generation. If the Mahonian echoes of her early poem “In Belfast” assured readers that they were in familiar territory, Morrissey’s later collections—set in Japan, China, the Arizona desert—sometimes seemed self-conscious attempts to diverge from places and subjects already mined by Seamus Heaney, Michael Longley, Paul Muldoon, Derek Mahon, and Medbh McGuckian. The poems in Parallax, her fifth and most successful collection (awarded the prestigious T. S. Eliot Prize in Britain), are more sure of themselves. Through dialogue with the older generation, she offers new ways of understanding the future and the past.

Parallax, which Morrissey defines as “Apparent displacement, or difference in the apparent position, of an object, caused by actual change (or difference) of position of the point of observation,” offers a key to this meticulously crafted collection’s main concerns: the relationship between past and present, young and old, aesthetic and domestic, art and life. Morrissey’s topics seem disparate at first. She writes of totalitarian Russia, Wordsworth, 1940s Hollywood, old photographs of Belfast, motherhood, Vietnam, jigsaw puzzles, her Communist childhood. Yet nearly all the light-strewn poems in Parallax speak to altered perceptions. Morrissey, Belfast’s first poet laureate, is hopeful about such shifts; it is no accident that poems of birth and children are set amidst those of disease, murder, war, and poverty. Past and future achieve an unlikely tandem, though neither redeems the other. As Morrissey writes in “A Lie,” “their days were not like our days, / the different people who lived in sepia.” They are “sunk back in the unwakeable house // for all we call and knock.”

Morrissey’s own house is wide awake: her young daughter chatters “like a businessman / on the last train home / after one too many espressos, / selling you his dream.” This is the future of Belfast, which has never looked brighter: mornings are “filled with running gold” and candle shadow is luminous at Evensong. Her hope is most explicit in “Peacocks and Butterflies,” which engages in a dialogue with Derek Mahon’s most well-known poem, “A Disused Shed in Co. Wexford.” During a family outing to an isolated aristocratic estate, they stumble upon an old “moss- / covered Nissen hut left over / from the war.” Inside, their daughter becomes “fixated on escape, unenthralled / by the swallowtails and the admirals.” The family emerges from the hothouse into a cool, well-kept garden, where “all her wishing terminates.”

We finish our visit taking tea and cake
in her make-believe kitchen, obeying her commands,
wiping our mouths on our hands,
calling her name.

Old manners are swept away in the face of the new as the child closes one door to open another. The symbols of war and the inequitable hierarchies of aristocracy give way to the easy and the familiar—there is no quarrel that cannot be solved over a cup of tea in kitchen. It is the child’s commands, and not the admirals’, that Morrissey hopes will be obeyed in the future. Just as “In Belfast” offered a more redemptive portrait of the city than Mahon’s “Afterlives,” “Peacocks and Butterflies” presents a less tortured, more whimsical encounter with history than “A Disused Shed.”

Yet Morrissey knows that children, and art, are corruptible. In “The Party Bazaar,” she remembers her Communist parents taking her to Party outings, and how, as she listened to a “Soviet representative,” “I clutched my lemonade and was convinced.” She links this poem to “The Doctors,” which describes how disfavored Soviet officials were systematically erased from the photographic record. Schoolchildren were the Party’s most pliable assets: “a nation’s girls and boys, all trained / in proper parlance, their fingers stained with soot, / draw over women’s faces with black balloons.” There is no mention of the Troubles in “The Doctors,” yet we are reminded that propaganda and indoctrination played their parts in Northern Ireland’s history, too.

The two poems that bookend the collection provide another clever parallax. The first, “1801,” is written in the voice of Dorothy Wordsworth at Grasmere. It is aesthetically rich and at odds with the dark history of its title. As any Irish reader knows, 1801 marks the Act of Union between Britain and Ireland, perhaps referenced in “the new moon holding the old moon in its arms.” In the prosaic “Blog,” which ends the book, the speaker describes his preference for casual, one-night stands (“It’s easy and clean and consensual”). The two poems seem to have nothing in common, yet there is a Muldoonian harmony in Morrissey’s suggestions of coupling and uncoupling. We have moved beyond Heaney’s “Whatever You Say, Say Nothing”—Belfast poets now write about the Act of Union or the satisfactions of casual sex without becoming embroiled in political or moral debates. Priests, preachers, and paramilitaries no longer control the city or its language. Such freedom behooves both life and art. Perspectives change, inch just beyond history. As Morrissey writes in “The Coal Jetty”:

There’s the stink
of rust and salt,
of cooped-up

water just released
to its wider element.
What’s left is dark and quiet—

as when Dorothy
opens her dull
cabin door

and what happens outside is Technicolor.