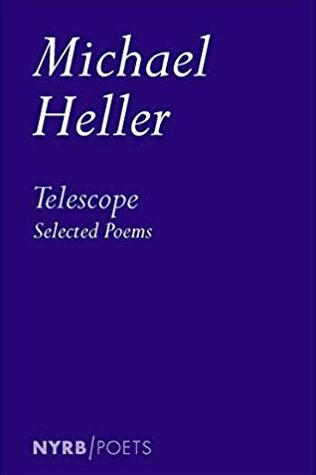 Over the past half century, Michael Heller has written a considerable body of poetry from which he has drawn this generous and apparently representative selection. He wields many varieties of free verse, from brief, sharply enjambed lines to long Whitmanesque lines to prose poetry. He also experiments with the open form and loose associations of Charles Olson’s projective verse, William Carlos Williams’s triadic moveable foot, and other familiar reiterations of modern poetics. His mid-career poems lean toward prose structures and rhythms, but like much of his work, they demonstrate an alertness toward the ways in which social and historical contexts corrode or obfuscate language:

But also now, to sense mind harrowed in defeats of language,
Bosnia, Rwanda, wherever human speech goes under a knife.

Heller builds upon the work of the Objectivist poets, particularly George Oppen, and their concern with language as structure rather than as the evocation of emotions. He has written extensively on the Objectivists, and while his poetics range more widely than theirs, he shares their interest in clarity and their precision in delineating subjects. A deliberative attention to language is a persistent thread in this complex body of work.

It would be inexact, however, to say Heller’s subject is language in itself. “Colloquia,” a relatively recent poem, notes that phenomena come into our presence because we are capable of evoking them through naming:

“World, world,” you wrote,
as though martyred to the visible,

the words one chose
would have to say it.

If the famous rosy-fingered dawn
existed, it existed to be proclaimed …

Here, “word” and “world” are mutually permeable. The history of speech, prayer, naming, praising, and articulating the mind draws us toward a visionary cosmos where language expends itself in a dark and numinous expanse. This idea of language merging with what it names and then bringing us toward less and less articulable visions permeates Heller’s work and becomes more explicit in his later poems.

The earliest poems in this selection, from the mid-1960s, lay the foundation for Heller’s larger grasp of visionary language. They also warn of the dangers along life’s linguistic journey: “And where you are going or have been, / the words erode // the continuity you call / yourself” (“One on the Muse”). But rather than eroding the self, Heller’s poems, as they accumulate, construct a voice that becomes more and more expert at distinguishing self from not-self (“Radiant // As any truth / Disfiguring all one thinks one is” [“Speculum Mortis”]). This voice also learns to sift the phenomenal universe very finely, to determine what it can accomplish or embrace, and what lies—momentarily, at least—beyond its grasp: “The moon! / It appears beyond my capacity / To do more than give it name [ … ]” (“Moon Study”).

The poems selected from Exigent Features (2003) become more specific about the opportunities and limitations of language. At the same time, they expand in rhetoric and diction, becoming more interrogative, longer-lined, with compound and complex sentences, such as in the opening lines of “Autobiographia”:

Weren’t you given a text? To honor the congregation, the organ dulcet,
the cantor’s hum, hymnal of Europe’s East, steps of sound made fugal

but laden with a weariness (joy for another day), history transmogrified
into plaint upon plaint, to be ushered into manhood, to be brought other’s pain.

Like so many of Heller’s poems, this reads like a manifesto, a statement of aesthetic purpose. The life invoked in the second person is that of someone wandering through a world of things that are always in flux and in danger of fading, translation or mistranslation. The poem embraces the Judaic sense of the power of the Word, but also the incumbent risks, the “delicate structure // of beths and vavs on parchment, the inner and outer of secrets.”

As Wallace Stevens explored the shifting relationship between imagination and reality, so Heller explores the shifting and often uneasy relationship between language and that which it purports to name. Other poets frequently touch upon this problem, but over fifty years Heller has developed a body of work that moves from groping toward the ways in which language helps distinguish self from other to a more sophisticated grasp of how the world is and isn’t text.

This selection is adroitly arranged to present the unfolding of Heller’s project. The poems work individually with clear and sometimes vivid imagery, but also develop the larger argument step by step. Although the collection has no preface or introduction (as most NYRB/Poets editions do), it does have useful notes pointing us to sources for some of the poems, many of which are grounded in Heller’s extensive reading and his interest in the visual arts.