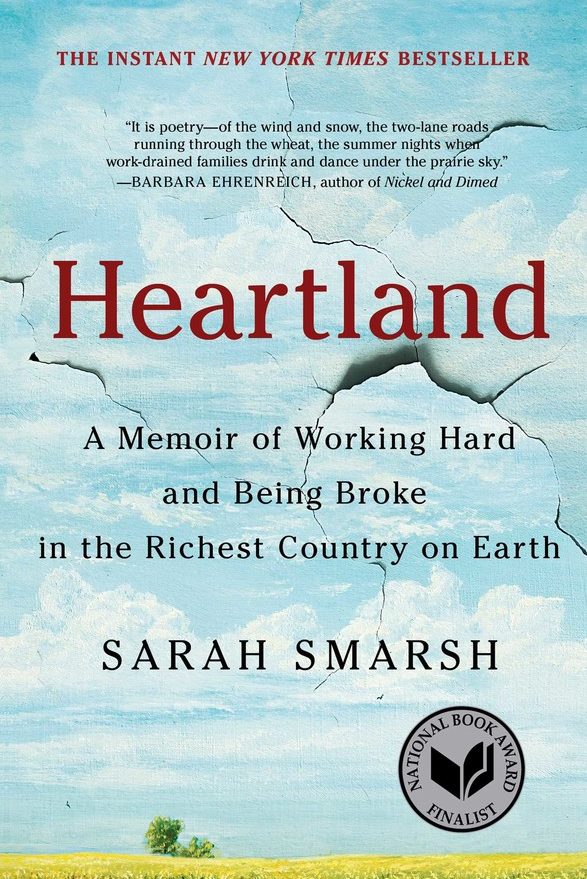 Sarah Smarsh’s memoir is a paean to the white, rural poor of the Midwest, giving voice and testament to lives eked out in in what is sometimes unfairly dismissed as “flyover country.” But the book is also more than that; it is an eloquent reflection on and analytical examination of cycles of poverty, and how generations of women, in particular, get caught up in these cycles.

Teenage pregnancy, Smarsh writes, is a prime driver of this cycle, and this marked her own beginning:

I thus was the proverbial teen pregnancy, my very existence the mark of poverty. I was in a poor girl’s lining like a penny in a purse—not worth much, according to the economy, but kept in production.

Smarsh breaks the cycle, however, and she expresses this by adding a peculiar twist to her narrative, sometimes addressing an unborn child. (That is, the child she never had as a teenager.) The device is employed occasionally enough to forget about it for long stretches, and when it arises it can seem like a note hit in the wrong key. For example, Smarsh describes how she lived with her grandmother, not her mother, whose peripatetic existence and abusive relationships weren’t suited for child-rearing. “I was reminded every day that kids are supposed to live with their mom,” she writes. “Kids asked why I lived with my grandparents.” Then to her unborn child, she writes, “But the first home you needed was the one I made sure you wouldn’t enter. A mother is the first residence, and I kept the porch light turned off.”

As a writing device, it can seem out of time and meter, but it’s clearly an important psychological element of this memoir. As a freshman in college, trying to make a living with a variety of low-paying jobs, she uses the hypothetical as guide and motivation:

A young woman in poverty, vulnerable twice over, I was mistreated at many of those jobs. I thought of you often, then—that question, What would I want for my daughter?

Smarsh’s socioeconomic insights are where this memoir takes flight. As a well-published journalist on this subject, Smarsh writes analytically and deftly about being poor and white in a country rife with reminders of what one doesn’t have. “Poor whiteness is a peculiar offense in that society imbues whiteness with power,” she claims, “not just by making it the racial norm next to which the rest are ‘others’ but by using it as shorthand for economic stability.” Smarsh’s modus operandi then is to give voice to her demographic. “I saw many white girls on television, but I rarely recognized myself in their stories,” she notes. “When I did see my place or people, they were usually represented as caricatures [ … ] To be made invisible as a class is an invalidation. With invalidation comes shame.”

But while childhood and poverty are typical lineaments of memoir, Smarsh establishes much more than just hardscrabble pathos. She is astutely analytical, and her work is, at times, driven as much by research as it is reflection. Her writing is peppered with statistics and data, even in the midst of hyper-personal rumination, and while this colder, more analytical tone can, at times, cut against the emotional weight of her family’s story, it pushes Smarsh’s work into territory that is her own. Combined with her messages to her unborn child, it lends her vision a uniqueness and insight that make this far more than an Angela’s Ashes for midwestern poverty.

Heartland is not only absorbing and engaging; it challenges the reader to look beyond stereotypes and to consider blind spots. There is a deeper suggestion here that our contemporary polemics, fueled by cable-news and social media, have caused even the most liberal among us to paint a large demographic of America with too broad a brush. And one of her main insights is unassailable: the importance of questioning popular narratives and assumptions and considering someone’s humanity first and foremost.

She asks us to view the collateral damage of the American Dream philosophy and to empathize with lives “built on a foundation of chaos, violence, abuse, [and] addiction.” Smarsh’s greatest accomplishment here might be how she avoids storytelling traps and cliche. She is not the one who escaped, she tells us. As a successful academic, author, and journalist, she “did not leave one world and enter another. Today I hold them simultaneously—class being a false construct, like any other boundary or category we impose.”