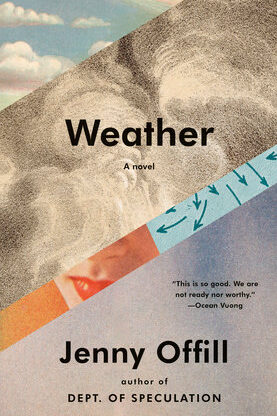 Jenny Offill’s voice in Weather stays in your bones and invades your thought patterns long after the book is set aside. She writes in short dispatches, describing everyday occurrences and numinous moments alike in only a few lines. The effect is not fragmentation, however, but cumulative awareness and understanding.

Offill’s structure seems to approximate human thought in the digital age, where every idea that surfaces can be pursued down rabbit holes of facts and associations, such as when Lizzie, the narrator, is caring for her infant niece:

I take Iris out in her stroller. It is a misty gray morning. I pull the plastic down over her. The Buddha once described how his father protected him from the elements.

A white sunshade was held over me day and night so that no cold or heat or dust or grit or dew might inconvenience me.

Lizzie, once a promising graduate student, now works in a university library. She is reckoning with middle age (and a bad knee) and is the kind of empathetic soul who soaks in the humanity around her, a person to whom people tell their troubles. “’I wish you were a real shrink,’ [her] husband says. ‘Then we’d be rich.’”

She has a codependent relationship with her recovering addict brother, who is a sinkhole of problems. She is wracked by doubts regarding her parenting and her relationship with her husband, Ben. The two of them live with their young son in an apartment in Brooklyn, yet seem to occupy separate spheres.

Lizzie’s flaws and her empathy draw us close to her, and in many ways this is a book about how the mind of a sensitive, astute underachiever sustains itself in a time of political and environmental crisis. References to “preppers” and deep ecology, as well as glancing allusions to the 2016 election, are scattered throughout the novel. Lizzie has agreed to serve as an assistant to her old grad school mentor, Sylvia, who hosts a doom-forecasting podcast about climate change called Hell or High Water. When she tells her mentor that she wants to move her son and niece “somewhere colder” in pursuit of safety, Sylvia’s rejoinder is both cutting and fatalistic:

“Do you really think you can protect them? In 2047?” Sylvia asks. I look at her. Because until this moment, I did, I did somehow think this. She orders another drink. “Then become rich, very, very rich,” she says in a tight voice.

Offill proved to be an innovator with Dept. of Speculation (2014), a similarly fragmented novel about a writer struggling with motherhood and marriage. With Weather, she truly settles into her chosen form, imbuing each fragment with heart and humor. Telling us about her brother’s wedding, Lizzie says, “I hate weddings because I cry and drink too much, but this time I get lucky. Catherine gets pregnant and they have a shotgun wedding at city hall.” Chasing down a bus and utterly out of breath, she reflects, “I know in a flash all my preparations for the apocalypse are doomed. I will die early and ignobly.”

Beyond this, there is something alchemical in the way that Offill can reveal so much about her characters in a few strokes:

The moment you tell Catherine about a problem she begins to act and she does not stop acting until the problem is solved. For this reason, my brother sometimes lets a problem go on for some time before telling her about it in order to prepare himself for the intensity of her mobilization.

Elsewhere, Offill offers a swift, poignant sketch of a woman for whom middle age has brought new insecurities:

Sometimes now with students there are these moments when it feels like a sudden cold wind blew through. So lately I’ve been checking that my sweater is buttoned right, that my T-shirt isn’t too weird. I’m like a woman carrying a full cup into a room of strangers, trying not to spill it.

Despite its brevity—the novel is barely 200 pages—Weather is a work you want to linger over and live with for a long time. It is also the kind of work that, like most truly great novels, will resonate differently with different readers. I belong to the same generation as Lizzie and as Offill herself, and I read Weather in part as a paean to a cohort experiencing middle age during the digital era. But its perceptive, wise exploration of fraught relationships and the psychological weight of climate change and political catastrophe will strike a chord with a far wider readership.