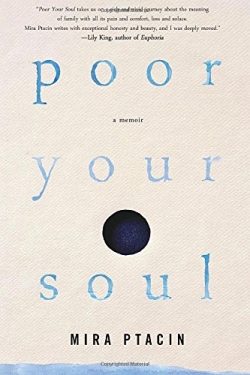 “I take the cabbage off the counter of the sink and slip it into my bra,” Mira Ptacin writes at the beginning of her memoir. “It’s not something I’d describe as pleasant—the cold, frosty leaves piercing my nipples on contact. In several minutes they begin to warm, and I will smell like my mother’s gołąbki.”

In the first few pages of Poor Your Soul, Ptacin reveals that she is newly wed, that she is living in New York with her husband and a dog, and that she is trying to become a writer. But before the details are allowed to settle, she takes her readers into the bathroom, where she stuffs a frozen cabbage leaf into her bra to stem the flow of breast milk. She describes the embarrassment and confusion of adjusting to a body that, after an abortion, no longer needs to prepare for motherhood.

Poor Your Soul is an emotional and engrossing memoir about Ptacin’s decision to have an abortion after learning that a host of medical conditions make the baby “unviable outside the womb.” It is also a story about becoming—or failing to become—a mother, tied up with the complexities of having a mother. Even the title, Poor Your Soul, is a tribute to Ptacin’s mother, who often somewhat ominously leaves the judgment of her misbehaving family up to God: “If those weeds are not cleaned up in two minutes, then poor your soul.”

The gołąbki from the vivid frozen cabbage scene returns later in the book when Ptacin introduces her mother, Maria, a Polish immigrant with strict ideals and a complicated heart. In her twenties, Maria grieved the death of her own mother and was forced to stay home to cook for her bothers. Ptacin recalls her mother cooking: she “builds mountains of sweet potato and pumpkin kale pie, pierogies and sauerkraut, and fields yielding harvests of gołąbkiand hunter’s stew.” She “mixes and spreads, creating a new landscape, an understandable, controlled environment.” Read more deeply, this passage reveals how Ptacin approaches writing her own memoir. In sculpting her story, she tries to create an environment in which she can understand the events and emotions leading up to her abortion.

In order to understand the pain of that decision, Ptacin takes her readers all over the map of her life, from childhood to her wild teenage years, from her pregnancy to her marriage to the child’s father. Ptacin’s memoir is a bit chaotic in its form; she dwells for pages on certain feelings, making some passages feel overly indulgent and repetitive, and then she abruptly shifts the scene. This chaos at times makes the narrative hard to follow, but it does not ultimately detract from Ptacin’s compelling and immersive storytelling.

The most engrossing portions of her memoir are the passages where Ptacin writes about her childhood with humor and subtlety. In one scene, Ptacin describes herself at eight years old, trying to run away from home on her bicycle:

No one seemed to care; our babysitter had even packed me lunch. She was Polish, her name was Lucia, and she didn’t get it. “You will never see me again,” I threatened, but she handed me a sandwich. Peanut butter and orange marmalade sandwich on rye bread. I hated it.

Hitched onto this funny childhood story is a description of the end of Ptacin’s junior year in high school. In the throes of teenage angst, Ptacin runs away from home again, this time for four months. She lives with a high school boyfriend until her mother threatens in a letter: “You come home, or you never come home again.” Defeated, Ptacin returns home. “Things are getting normal,” Ptacin writes. “Four months go by and just as we are becoming our family again, Jules dies.”

Up until this point, Ptacin’s little brother Jules has been a sweet but somewhat peripheral character. His death in a drunk-driving accident shifts the tone of the memoir and casts the latter half of the book in a somber and reflective light. It is only after she begins to write about her brother’s death that Ptacin comes to peace with her abortion. And it is through understanding the loss of her own child that Ptacin begins to understand her mother’s emotions and complicated disposition. “Since becoming pregnant,” Ptacin writes, “I’d been interpreting things in a new way—not quite from the perspective of a parent. Not quite that. But from the perspective of my parents. Or any parent.”

The dual loss of Jules and of Ptacin’s baby—and the grief that follows each—help mother and daughter understand each other. “You want to see the stages of grief and identify with them, check them off,” Ptacin writes, “but grief never ends.” Ultimately, Poor Your Soul is a eulogy for brief lives and those who loved them.