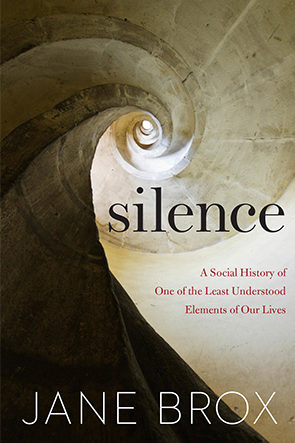 Jane Brox’s Silence starts with the story of the first prisoner at Eastern State Penitentiary in Philadelphia, an eighteen-year-old man named Charles Williams who, in 1829, was convicted of stealing and sentenced to two years of solitary, silent confinement in the penitentiary. “It was hoped there would be an expansiveness in the silence,” writes Brox. “Charles Williams’s sentence was meant to punish him for his crimes and deter others from committing the same, but it was also meant to alter his soul.”

So begins Brox’s deeply researched and thought-provoking investigation into the structure of silence and its transformative power. Over the course of the book, she explores monasteries both ancient and modern, the experiences of imprisoned people in solitary confinement in the US and in the Soviet Union, the silencing of women, and how silence has impacted her own life. This breadth is impressive, but the frequency with which Brox jumps between centuries, locations, and characters means that the narrative often feels disjointed, and readers risk losing the thread. Had Brox taken stronger narrative hold of her stories, or given an explanation as to why she chose the stories that she did, the somewhat fragmented reading experience might have been avoided. But the rapid transitions between subjects do not diminish the overall impact of the work. Readers will come away from the book convinced by its central idea: that silence, so often an invisible part of our lives, is worth paying attention to.

The story of Charles Williams, the first prisoner at the first institution in the United States to attempt civic transformation through silence, acts as an anchor throughout the book, providing a point of reference for other wandering anecdotes. It is a shame that not much is known about Williams’s life, but Brox imagines his experience vividly, an act that honors what would otherwise be a story lost to history. She makes her first thematic jump from Williams to the silent lives of monastics, drawing a distinction between the chosen silence of religious communities and the silence forced upon people living in prison: “When I imagine the silence Charles Williams endured at Eastern State, I imagine its weight—how it must have been almost entirely unchanging and unforgiving, pressing down so completely that it shattered all the smaller silences of the day. And then I imagine the monastery, where both silence and the breaking of it are considered sacred, and the days are interwoven with silences of varying purposes and duration.”

Brox makes intriguing comparisons between silence in centuries past and silence in modern life. “A few things have grown quieter over time,” she writes. Reading is one of them. At the dawn of the written word, monks generally read with their lips, speaking aloud the words on the page. With asides like this one, Brox paints a moving picture of a world before modern noise, when the tolling of bells made a villager stop in his tracks and pray, and when the coming dusk heralded silence, for one could not work or read without light. Sound, the opposite of silence, acts as a marker of time: in colonial-era prisons, when inmates were given trades to learn while living in prison, the sound of a hammer or the pounding of a shoemaker’s tools in a neighbor’s cell signaled to the listener how much time had passed. That is why the imposition of silence is an added torture for those in solitary confinement, Brox explains. She profiles Eugenia Ginzburg, a member of the Communist Party in Russia, who was arrested in 1937 for her political beliefs and sentenced to ten years in prison, with a portion of that time in solitary. Guards patrolled the cells, stifling any attempt between those imprisoned to communicate in taps or whispers. “I would have given anything to have heard just one sound,” Ginzburg wrote in her memoir years later.

One of the most interesting parts of the book focuses on Thomas Merton, who, as a student at Columbia University in the late 1930s, converted to Catholicism and soon after joined the monastics at Gethsemani, a famous abbey in Kentucky. It was there that he began to write the story of his young, fast life in the city, and his realization that solitude and silence could help lost men “believe in human goodness again.” He continued to write about the benefits of retreat and solitude, and gained a popular following. In his later years, he wrote against the sometimes-repressive Catholic hegemony to decry war and nuclear armament and to support the civil rights movement. Merton’s life, as Brox depicts it, was characterized by an internal battle between chosen, isolated silence and the problems of the modern world, which, Merton believed, demanded that he speak out and make noise.

Silence ends with the modern-day story of Joe Labriola, who, while serving a life sentence in Massachusetts Correctional Institution-Shirley for first-degree murder, found Thomas Merton’s Seeds of Contemplation during one trip to solitary confinement. “I read it, I ate it,” Labriola recalled. “I shouted out passages to men in other cells through the barred window.” After he left solitary, Labriola and his fellow inmates formed a chapter of the International Thomas Merton Society within their prison. “In a noisy place where almost everything has been taken away,” Brox writes, Merton’s words “offer both communication and a chance to find what silence can offer—the freedom to think, to form one’s own ideas, and, perhaps, to be changed.”