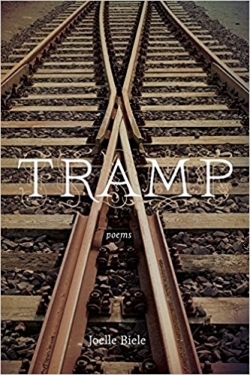 “Most girls wouldn’t like this sort of life.” So begins Joelle Biele’s Tramp, a book of poems about the lives of female vagabonds. The narrator of the opening poem, titled “A Man Mistreated Ada Jones and She Is Seeking Him,” continues:

I went to high school two years, read books
of adventure—
Kidnapped, Sailing Alone,
Farthest North—
pulled them off the shelves
with the tips of my fingers,
crawled into a boxcar,
stayed there until I was far from home.

In the poem, Jones’s narrative unfolds as if the 19-year-old is in court, explaining herself to a judge. She tells the story of the employer who took advantage of her, the odd jobs she took up as she pursued him “to Denver, from there to Chicago,” and how she eventually became so enamored with tramp life, “the excitement of never knowing / where you’re going, the comradeship—” that she forgot her purpose and became a full-time tramp.

The word “tramp” has taken on many meanings over the decades. Biele, the author of two previous books of poetry and editor of Elizabeth Bishop and The New Yorker: The Complete Correspondence, defines the term “tramp” for her readers at the end of her book. At one time, tramp “referred to the steady sound of working animals” and “a long, tiring walk, often during a search for work … It wasn’t until the early twentieth century that ‘tramp’ became synonymous with a sexually active woman.” It is this definition that might come first to mind today, but “tramp,” as Biele uses the word, refers instead to the female wanderers whose stories, for many decades, have been left untold.

In her poems, Biele expands upon the reasons for the women’s journeys; often it is past domestic and sexual abuse that propels them to the road. Many of the women jump a boxcar to get away from a dangerous home life, and many encounter a similar set of consequences for their wandering: jail, return to a male caretaker, death, or even forced sterilization, as women who preferred to be out on the road rather than with their husbands were often considered to be mentally unstable.

Biele a good number of the poems in this book on turn-of-the-century articles from local newspapers. “I have worked to maintain the original voices while reshaping the texts and tightening the language,” she explains in her notes. Such a strategy is in line with the kind of writing that Muriel Rukeyser, Charles Reznikoff, and James Agee pioneered in the 1930s, the genre we call now “documentary poetics.” It was Rukeyser who, in a 1938 collection of poems based on accounts from survivors of the Gauley Bridge industrial disaster, declared that “poetry can extend the document.” Poetry was, for these writers, a living text that could fill in narrative gaps, and a place where truth was rescued from dry or inadequate historical coverage. Of the few million people historians estimate were riding the rails in the late 1800s and early 1900s, Biele writes, “the percentage of women is unknown, though one guess during the Depression was 5 to 10 percent of the overall tramping population.” Tramp makes up for the dearth of information on female hobos—extends the documents, so to speak—giving voice to the women who dared to take their bodies across the country.

Interspersed with the women’s stories are other poems that start and then cut off, only to pick up pages later. These interrupted poems include a dictionary of hobo words laid out alphabetically, a series of poems about Clyde Dixon, a kind of everywoman hobo, and two poems titled “Bodies of Evidence” (I and II) that describe the bodies of women found dead on the rails. Their bodies are used as documents of the violence done to them, of the homes they came from and the places they hoped they were going.

The stop-and-start nature of these poems mimics the experience of tramping: one arrives at a junction, disappears onto a passing train and turns up in another state days later. One such poem in a series of “Postcard” poems begins: “One day you wake up in a town you can’t name / and there’s no way to plot a path from A to B.”

These postcard poems are where Biele writes her most lyrical and whimsical lines, evoking a drifting quality in each descriptive “postcard.” The postcard poem above, “sent” from Iowa, offers a rare, treasured glimpse of the speaker with these ending lines, which at once set her in motion and hold her still for a moment:

sheet, feel it drape over my face, arch my back
like a cat, be reduced to nothing but bone,
the big wind that races across the field, bend

the trees back, push clouds, be shadow, whip past
blouses hanging on the line like women waiting
for their lives, all of it silver and into the sun.

Biele’s Tramp is well worth the read, an important and thoughtful collection of imagined histories that one is tempted to pick up and put down—and pick up again and again and again.