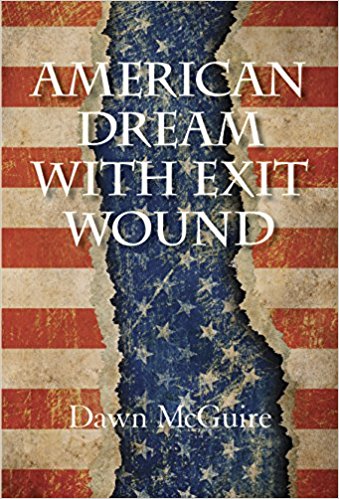 The lyric poems in Dawn McGuire’s third collection, American Dream With Exit Wound, are spun from primary passions and hauntings, searing experiences that leave mind and body wounded and speechless. McGuire brings to this task the eye and ear of a poet, a deep familiarity with classical and contemporary literature, and her training and practice as a neurologist.

The poems in the book’s first section focus on the physical and emotional damage America’s wars have inflicted on its soldiers, whom McGuire knows intimately from her clinical practice. These survivors, and their families and fellow citizens, are stalked by war’s physical and mental damage. Hearing loss, amputations, PTSD, addiction, anorexia, acute or inchoate fear for self and kin—these are the raw legacy of our ongoing “war on terror.” One vet at the movie theater is himself “Hazardous Material” (the section’s title):

He’s waiting for mayhem or the feature
film, scrolling through email, listening
with one ear to previews.
His good ear, the other
a rag of eardrum, incus in bits,
stapes shot to shit. …

As long as there is no loud noise.
At this point laughing’s ok.
Ten years of chick flicks
and in real life he still
can’t trust himself
with a girl.
(“Hazmat”)

McGuire’s eye is both diagnostic and compassionate, her tone pitch perfect, her imagery informed by millennia of war. In the title poem a woman—wife? girlfriend? mother?—looks carefully at her veteran’s belts, looking for the hole close to the buckle that indicates it’s being used as a tourniquet to shoot up. For her soldier,

The sting is brief
endurable

And all that is unendurable
melts into air

Achilles at last asleep in his tent
His pillow wet

The warm, blue Aegean
slipping over it

The book’s second section is titled “Limbics,” for the “structure in the brain common to all mammals; associated with primary emotional pigments: love and lust, rage and shame, grief and epiphany.”

The neocortex can loom large,
harsh as an exhausted mother
saying use your words use your words
but your amygdala’s in flames.
(“Jealousy”)

Often drawing analogies to classical literature, the poems here are drawn from the speaker’s own encounters with core passions and their implications, reminding us that “Mother, Money, God and Sex / have the shelf-life of titanium.” In “Love in the Skilled Nursing Unit,” a man whose brain injury won’t allow him to make new memories sees his wife of thirty years stand in the doorway and falls in love anew, over and over again in successive present moments. For him, “she’s Aphrodite” and “Suddenly he’s mute— / his tongue, / broken by beauty.” In other poems, prior loves are revisited, a friend believes that turmeric has cured his cancer, and feeling can be murderous—just as jealousy drove Anytus to sentence Socrates to death, so the speaker’s grandfather, “a gentle Christian man” who at ninety-two “still / kept a pipe wrench in his boot” in case the rich bankers returned to their farm “to circle and sniff his Helen.” The speaker affirms: “We’re wired like this.”

In the book’s final section, “Ghosts,” we find the speaker embedded within the constellation of her own family history, an inheritance marked by genetics and experience. The intimacy, distance, and complexities that exist between mother and son, between father and daughter, with attendant reflections and regret, live in these deft linguistic portraits. After a day of practicing medicine, “you go back to the porch at night.”

The whole clan’s here. H. H. brings moonshine from Pactolus. Rildy sets out fudge and cigarettes. The circle is lit by fireflies in mason jars. Everyone knows where to sit, including the dead. The ratio of circumference to diameter is physical, mystical, unresolveable. We are sealed in. We laugh as one; our lights flicker in unison.
(“Kin”)

The book is gorgeous and riveting, erudite and street-smart, reconciling the realities of time and body, love and damage, with language. Although “There is no language that makes sense / of living and then dying” it’s all we have:

At the holiday table, the old engineer
says, “If I didn’t make things
that make noise, I’d disappear.”
The composer says, “I am my noise.”