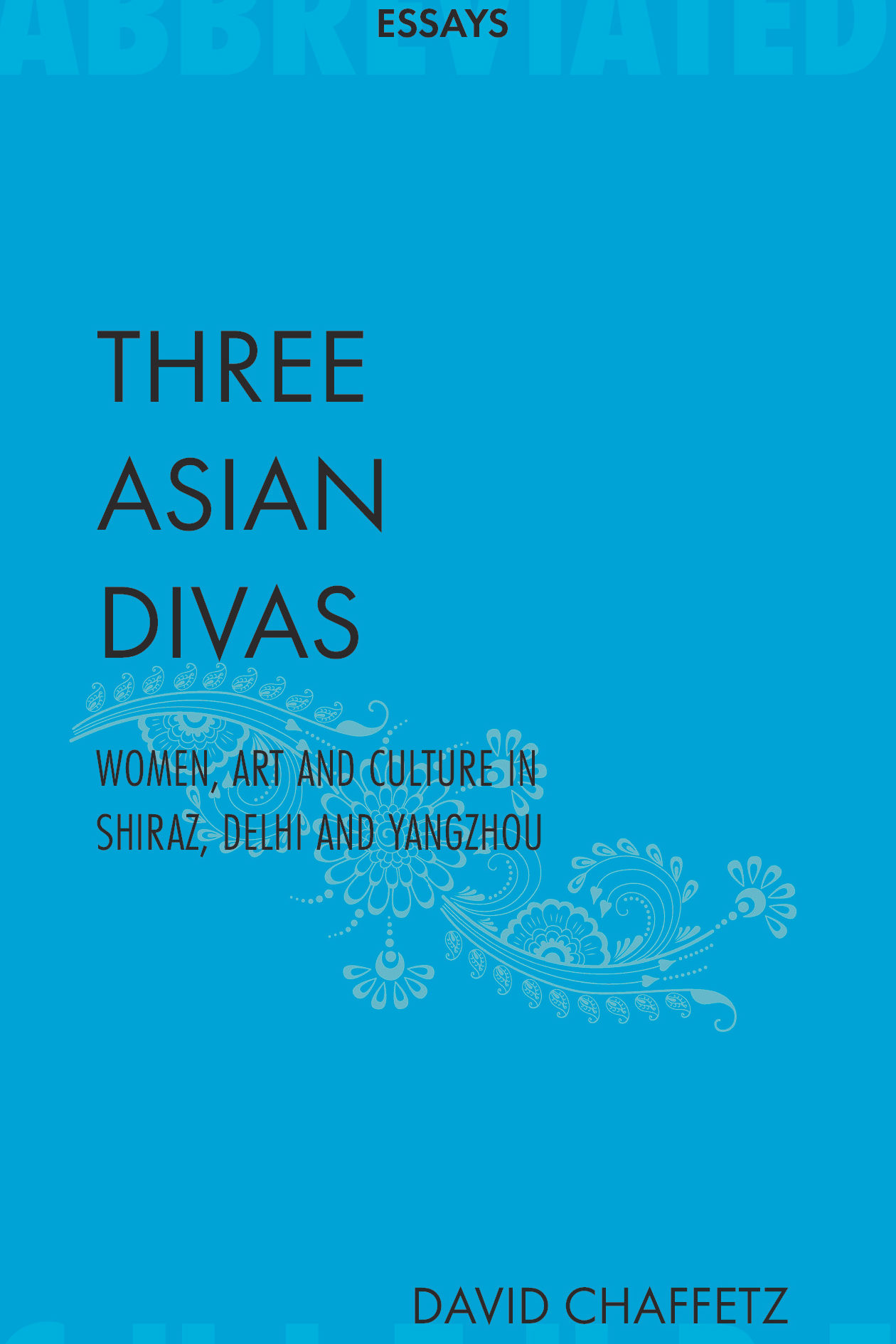 In this extended essay, David Chaffetz, a scholar of Persian and related literary traditions who has lived for years in China and Southeast Asia, zeroes in on erasures in the history of these traditions: the brilliant and highly trained women virtuosos—poets, singers, and dancers—who cut a swath through the opulent courts of Iran, India, and China. From the fourteenth to the nineteenth century they established writers’ reputations and set trends in arts and culture. Like the famous western divas who brought Puccini’s and Mozart’s works to life (and admiring men to heel), they acquired respect, freedoms, and agency: they were able to make their fortunes and their own choices in life and love within cultures where women were subordinate or invisible.

Many of the classic poetic and musical works in these Asian traditions are artifacts, concrete legacies, of these women’s extraordinary live performances: “they are classics because of their once live performance” (my emphasis). In Three Asian Divas, Chaffetz invites us to attend three of these “imaginary but probable performances.”

First he recreates an evening in fourteenth-century Iran, in Shiraz, a city of gardens and home to Hafiz (1315–1390), Persia’s greatest lyric poet. A moghanni, or songstress, enters a hushed salon, stands at the center of a magnificent carpet surrounded by wealthy patrons drinking wine, and performs the dramatic turns of a new ghazal by Hafiz, leaving her male patrons—and us—spellbound.

Chaffetz next takes us to Delhi in the 1830s, the twilight of the Mughal empire. In a dazzling pavilion of the Mughal court, a tawaif, a female Indian singer awash in bangles and silks, enacts, in song and dance, the lover’s lament in a new ghazal by the Urdu poet Ghalib. And last, we cross a river at dusk in Yangzhou during the early Qing empire to a pavilion among willows where a dazzling performer, a minji, sings an aria from The Peach Blossom Fan (1699), an opera in which a diva rejects the advances of an emperor.

Each performance is recreated in gorgeous detail: the broader context of the magical evening at hand; the physical surroundings; the patrons in their opulent settings; and, at the center, the performer, her musicians, and the song, this last presented in a way that reveals the rhythms, rhymes, resonances of the original. We learn how these divas were recruited and trained, the degree of autonomy each had as artists and icons, how they managed their patrons and, eventually, their retirement from public life. Chaffetz also traces the demise of such female singers, their status diminished over time by increasingly fundamentalist Islam, by the more “muscular Christianity” that arrived in India with the British, and by the division of their art into media stardom on one hand and sex work on the other. He also documents how the effect of these performances echoed across the silk roads and trade routes to nurture similar traditions from Korea to the Ottoman Empire.

Most intriguing to this reader are the methods Chaffetz uses to fill in the blanks of cultural history, piecing together or postulating the lives of the female performers he describes. Using memoirs, novels, and early recordings that describe the Indian tawaifs and the female divas of Chinese opera, he makes these women visible again. And while we have no hard evidence of female performers in fourteenth-century Shiraz, we know, for example, from the names of the tawaifs and from accounts of the works they performed, that in the later sanctuaries of Hyderabad and other Indian princely states, the singers were familiar with Iranian traditions.

The essay’s appendix offers a more granular look at the songs themselves: their forms and literal translations, as well as explanations of where and why Chaffetz has made the translation decisions he has. On the book’s website there is not only a list of sources for further reading but also links to fascinating audio and video resources. These include recitations of the songs, videos of performances (from archives or from modern film), and discussions of the cultural contexts. And at the center of this recovered history sit these extraordinary women, revealed like the interior of a geode, in this volume which is—like its subjects—slim, graceful, entertaining, and deeply erudite.