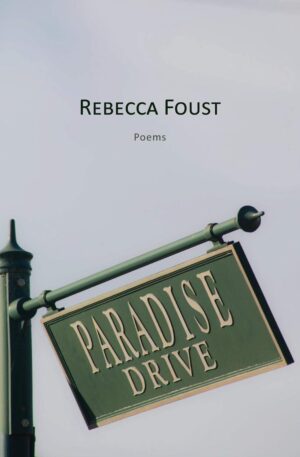 Paradise Drive, Foust’s fifth book of poems, tracks two journeys. The first is the speaker’s geographical journey from the despair of her hard-pressed childhood in central Pennsylvania to the despair of her high-net-worth married life in Marin County, California. The second is the speaker’s spiritual quest for meaning—as artist, wife, mother, and troubled citizen of the community her poems describe. These two contemporary voyages are woven together through a sequence of seventy-eight formally diverse and deftly crafted sonnets, making Foust an heir to Sidney, Spenser, Donne, Berryman, and Lowell. Some poems are formal and tightly rhymed, others are looser, with internal or slant rhyme. The sonnets’ language moves nimbly from erudition to slang, from the language of shared human experience to the insider talk of the rich and brittle, navigating between excruciating proximity and ironic distance, and bantering, as the occasion requires, with Bunyan and Augustine, Sappho and Blake. Make no mistake, this sequence is a tour de force.

The sequence begins in a glittery Slough of Despond, with all of Foust’s formal and linguistic talent on display:

on-the-wane, children grown and gone.
Who, voice-trained from birth in desire,
wakes one morning wanting—nothing—
in the way of things. Wanting some not-thing
not quite not-seen. Her dreams
—Macy’s-parade-balloon-sized dreams—
now lie, a tangle of downed silk and line.
Waist-deep in bright ruin, she labors to sing,
wondering if wanting is, after all, all
there is. Somewhere far away old ice recedes;
somewhere near new wars combust. Here, rain is rare
and Pilgrim sings her scales to the dust.
House of no children, guest room of no guest;
no god or guide, a broken song. Her quest.

Neither confession nor caricature, Foust’s tale of her Pilgrim’s progress is both specific to the speaker’s time and place, and yet universal, emotionally painful and, in places, completely hilarious.

The book is divided into three sections. The first, “The Marriage of Heaven and Hell,” is a thirty-one-poem portrait of Pilgrim and the internal contradictions of the glamorous who live on Paradise Drive. We meet the hedge fund husbands, post-financial-meltdown, trying to stay ahead of federal subpoenas. We meet the Seven Deadly Sins on the Marin party circuit. Here is “GREED, Exercising Noblesse Oblige”:

The price tag of my suit? What absolves that
is my tailor, whose job depends on this tux:
Brioni, bespoke, and better than sex.”

At these parties Pilgrim responds to social pressure by locking herself in the bathroom with The Cantos, and struggles with the social scorn that accompanies the discovery that one of her children is autistic:

The Swede to her left leaned in
to discuss Pilgrim’s “asparagus” son,
worried, it seemed, that his own son
might be part green vegetable too.

and the challenges she faces as a mother:

where to find
the manual that tells how to respond
to the loved child who from his snug bed
whispers, I wish I were dead, Mom?
Tell me, Dr. Spock, what to do about that,
what does a mother fucking do about that?

The second section, “The Fire is Falling,” moves back to Pilgrim’s childhood spaces and her parents’ deaths, and then returns to examine the ways in which those who live along Paradise Drive manage to cope: drugs, alcohol, suicide.

There’s one Deadly Sin not at the party tonight,
and we’re her heirs….
She’s the slough all sin spawns in,
the one who was coached to rank linen
by threadcount and children by GPA.
She’s the one who starved herself gaunt
as Gaugin’s Le Christ Jaune and who woke
one noon to find herself wholly alone.
She’d have said she was happy, if you asked.
(You didn’t ask.) The cop sips his Starbucks.
The grapple hook drags Phoenix Lake.

The final section, “O Earth Return,” explores Pilgrim’s ascent from these despairs—by means of Alcoholics Anonymous, her child, her husband, love—in poems that, like those that preceded them, never come close to being trite:

The quest was a metaphor, of course—
it could mean abroad in a world
where May keeps blooming
right through one’s own fall—but also:
just asking the questions.
(“The Quest”)

When was the last time you found a book-length sonnet sequence that you couldn’t put down? Paradise Drive is that rare one.