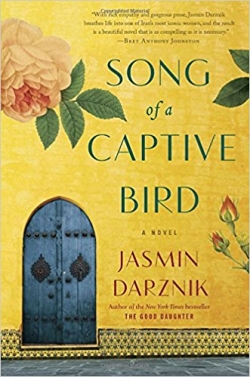 Song of a Captive Bird

Remember its flight,
for the bird is mortal.
—Forough Farrokhzad

Forough Farrokhzad, who rebelled against the gender-based constraints of the society into which she was born, and whose groundbreaking work as a poet and filmmaker sent shock waves through modern Iran, was mortal. She died in a car crash in 1967 at the age of thirty-two. She remains the single most important woman poet in all of Iranian literature, and an icon for women in Iran and elsewhere who seek their own voice. Here, in Jasmin Darznik’s riveting novel, Song of a Captive Bird, the flight path of Farrokhzad’s astonishing and accomplished life is richly imagined and brought to vividly to life as a first-person account spoken by Forough Farrokhzad herself.

In the opening chapter, we are smack up against the suffocating constraints against which Farrokzad rebelled: the book opens in a dirty room deep in south Tehran where sixteen-year-old Forough has been dragged by her mother. Why? The young girl has been discovered speaking, unchaperoned, with a boy cousin, Parviz, some years her senior. Her father, a colonel in the Shah’s military, beats her for her boldness and for the shame she has brought to the family. Her mother’s mission in the slums of the city is to obtain proof of Forough’s virginity. Forough fights back, and what happens in that room affects everything that follows.

To head off further rebellion and to uphold the honor of Colonel Farrokhzad’s household, Forough and Parviz are coerced into a quick marriage, and she follows him to his parents’ house in the conservative provincial town of Ahwaz. She bears a son, Kamiyar. In her loneliness and desperation, she turns back to her childhood love of writing poetry, but now with the new voice—a woman’s voice—of wife, mother, lover. She takes a twenty-hour train ride alone to Tehran to look for a publisher. She becomes the lover of the man who facilitates her poems’ publication. She writes of her passion and their relationship, and when her poem “Sin” arrives on the literary scene in the 1950s, she becomes instantly famous—and notorious—across Iran. No one has written in a woman’s voice, in this way. She is divorced by her husband. She loses custody of her son. She is vilified, shunned; her father orders psychiatric institutionalization, shock treatments. She finds few allies and a new lover: a famous—and married—filmmaker in Tehran. She goes to work for him. She learns filmmaking in Iran and Europe; she directs The House of Black, a groundbreaking, internationally acclaimed documentary about a leper colony in northwestern Iran. Her poems grow in strength and depth and originality. Around her, Iran endures wartime occupation, the 1953 UK and American coup d’état against Mossadegh, and the Shah’s vicious repression of dissenters, communists, and clerics.

Quite a life. And quite a challenge to bring such a complex, ferocious, talented woman to life in her historical context and in an American novel. Darznik draws wonderfully on many sources, including Forough Farrokhzad’s own work. The novel is infused with her poetry, not only in occasional poem fragments (beautifully translated, I might add), but in its images and themes, and in how the voice of the novel, like the voice in the poems, changes over time. Darznik has also drawn on film, biographies, articles, interviews, and first-person accounts in Persian and English. Her experience as a daughter growing up in an Iranian-American family in exile, reading her mother’s cherished copy of Farrokhzad, informs and infuses her compassionate recreation of the poet. And wherever “the gaps and fissures in the historical record opened a space for invention,” Darznik’s skills as memoirist, historian, and storyteller are in evidence. It’s a richly imagined portrait of one of the world’s great poets.