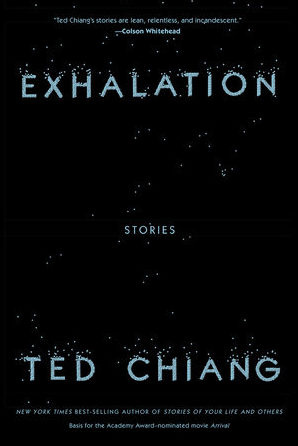 Ted Chiang has built a cult following based on a few dozen exquisitely crafted, intellectually provocative, and poignant science-fiction short stories and novellas. The accolades started early in his career. His first published story, “Tower of Babylon,” won the 1991 Nebula Award for Best Novelette when Chiang was in his early twenties. A profound parable reminiscent of Borges, it follows the exploits of a group of miners summoned by the builders of the nearly completed tower of Babylon to climb to its very top (a journey of four months) and from there to “cut through the vault of heaven.” Here, as in some of his other stories, like “Hell is the Absence of God” and the more recent “Omphalos,” Chiang treats religious cosmology as concrete fact. Since the publication of “Tower of Babylon,” his work has garnered four Hugo, four Locus, and an additional three Nebula awards. In 2016, mass audiences were introduced to the power of Chiang’s ideas in an altogether different medium with the release of French-Canadian filmmaker Denis Villeneuve’s movie Arrival, an adaptation of Chiang’s mind-bending 1998 novella “Story of Your Life.”

Exhalation comprises nine stories and includes notes at its end revealing Chiang’s inspirations and creative process. The collection presents Chiang’s unique talent in abundance, though those who have been following his work closely for some time may be disappointed to discover that most of the stories have been published before. But this is a minor gripe. Ultimately, the collection offers convenient, one-stop access to a selection of Chiang’s finest works from the past fourteen years. The unifying themes of the collection are the extraordinary ingenuity that can be brought to scientific and technological progress, the tremendous freedom and empowerment that progress can bring, and the varied and unexpected ways in which that progress can transform and even trap us.

“Exhalation,” the title story, is a pocket-sized epic of scientific inquiry. The story starts in an atmosphere of mesmerizing strangeness, its narrator an intelligent alien citizen of a sophisticated civilization with long-established traditions. The location of the civilization relative to Earth is never revealed. Instead, we get tantalizing clues like this: “I have journeyed all the way to the edge of the world, and seen the solid chromium wall that extends from the ground up into the infinite sky.” Nor do we get a comprehensive description of what the aliens look like. We’re told that they need argon to survive. It is their “air,” as oxygen is ours, but they don’t breathe quite like we do; the narrator tells us, “Every day we consume two lungs heavy with air; every day we remove the empty ones from our chest and replace them with full ones.” When an installed pair of lungs runs empty, the individual “dies within seconds of his air running out.” These, and other provocative but mysterious disclosures, raise questions: Are these machines? Synthetic people with artificial intelligence? Sentient creations of an altogether different life form?

While getting his lungs replaced at a filling station, the narrator, a self-identified “student of anatomy,” hears an intriguing rumor about a recently observed and unprecedented anomaly. Each year, a ritual takes place in which town criers in districts throughout this alien world stand in public squares and perform a recitation that takes exactly one hour, as measured by the clock towers located in each square. But the last time this ritual occurred, several criers noted that the clock towers struck the hour before they were able to complete the recitations. The anomaly might have been explained away had it occurred in only one location, but the fact that it has happened simultaneously in multiple districts intrigues the anatomist, who hypothesizes that the anomaly is linked to a set of long-standing and interrelated astronomical, anatomical, and physiological mysteries. Like an alien cross between Galileo and Galen, he risks everything to get to the root of these mysteries, performing an extraordinary and perilous scientific experiment that he believes will clarify his civilization’s destiny.

The structurally complex story “The Truth of Fact, The Truth of Feeling” follows two narrative threads. One is set in a near future where lifelogging—”wearing personal cams that capture continuous video of [users’] entire lives”—is common. But, “like most photo albums,” these cams “lie dormant except on special occasions.” The arrival of Remem, a new technology that enables almost instant memory retrieval, is a game changer. The narrator, a journalist who claims that he “welcome[s] new technology as much as anyone,” observes with growing foreboding the effect of Remem on his daughter’s mind and on society more broadly. A counterpoint narrative is set in a West African village sometime in the past (it’s unclear exactly when). The narrative recounts the experiences of Jijingi, a young boy who learns to read and write under the tutelage of Christian missionaries. Jijingi is quickly captivated by his new knowledge, which allows him to understand the thoughts of others and to record and transmit his own. But complications ensue when the power of the written word collides with his community’s oral traditions. Both narratives highlight the profound impact technologies that record and preserve the past have had on our individual and collective consciousness.

The story “Anxiety is the Dizziness of Freedom” is about a future technology called “prisms.” “In colloquial terms, the prism created two newly divergent time lines … and it allowed communication between the two.” The ability to talk to one’s doppelgänger in an alternate time line has a massive and complex impact on society and individuals, including an epidemic of existential crises: “Many worried that their choices were rendered meaningless because every action they took was counterbalanced by a branch in which they had made the opposite choice.” The story follows Nat, who works at a prism rental shop called SelfTalk, and Dana, a therapist who specializes in treating the various pathologies that arise from the new technology. The intersection of the two women’s lives leads to a captivating and fateful ethical dilemma.

Chiang’s unadorned and straightforward writing style keeps the focus on what’s most special about his stories: their ingenuity, their sheer and exhilarating inventiveness. This inventiveness is all the more remarkable for the insights it provides into the complexities of our relationships with other people and with the world around us, as well as into the technologies we create that, in turn, define who we are.