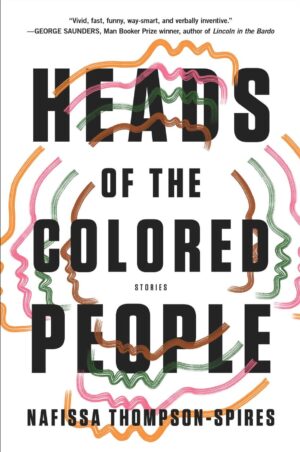 Heads of the Colored People

In Nafissa Thompson-Spires’s debut short story collection, Heads of the Colored People, a doctor suggests that an adolescent girl’s sudden and overwhelming bout of hyperhidrosis is caused by anxiety, and then asks, “Is there a history of trauma?” The heart of this collection of twelve stories, the thing that Thompson-Spires communicates with great verve, humor, and empathy, is the answer to that question—a booming “Yes!”—especially as experienced by black Americans.

Heads of the Colored People captures black lives in this current, divided, Facebook-Live-Black-Lives-Matter-#MeToo moment, and catalogues trauma’s impacts on black bodies, minds and souls, female and male, adult and child alike, as perpetrated against us, by us and between us in stunningly myriad forms: systemic racism and unconscious bias, police brutality, double consciousness, body consciousness, self-hatred, and more.

Thompson-Spires, who holds a PhD in English from Vanderbilt University and a Master of Fine Arts in Creative Writing from the University of Illinois, states in the collection’s afterword that the inspiration for the title and, to some degree, the subject matter, was a series of literary sketches written in the 1850s by James McCune Smith and published in Frederick Douglass’ Paper. Smith’s sketches depicted a range of black American laborers, washerwomen, gravediggers, and other diverse and sundry folk. A leading intellectual, abolitionist and colleague of Douglass, Smith wrote his sketches in order to humanize black Americans in the public consciousness at a time when phrenology was all the rage and served as the pseudoscientific foundation on which white supremacists built their rationalizations for a race-based caste system.

Thompson-Spires notes, though, that the stories in her collection don’t follow the same structure as Smith’s sketches, and that the lives of the characters in Smith’s work differ markedly from those of the characters in her stories in their rights and conditions under the law. Thompson-Spires writes that while abolitionists like Smith “were trying to theorize what it would mean for black people to have the full rights of citizenship, the black people in [Heads of the Colored People] have, on paper, full rights under the law.” Her stories, she continues, “maintain an interest in black US citizenship, the black middle class, and the future of black American life during pivotal socio-political moments.”

The titular story, “Heads of the Colored People: Four Fancy Sketches, Two Chalk Outlines, and No Apologies,” pans around the moment when two unarmed black men are killed by police on the sidewalk outside of a cosplay convention in Los Angeles. The narrator guides us like the host of a criminal forensics show, an exposé, complete with reenactments, on the brutality of bias: “A well-read, self-aware, self-loving black man with blue contact lenses and blond hair and a periwinkle suit was shot down in Los Angeles after a reportedly violent altercation with a well-read street promoter, who was also shot, after police officers answered a complaint.” The narrator admits to the obliqueness of the story’s form: “I concede that it might have been so much more readable as a gentle network narrative … ” And she confesses to stumbling at the limits of expression when forced to face the obscene aftermath: “But I couldn’t draw the bodies while the heads talked over me, and the mosaic formed in blood, and what is a sketch but a chalk outline done in pencil or words?”

In “Wash Clean the Bones,” Alma, a church singer and single mother who also performs at funerals, is haunted by memories of her brother’s killing by police years earlier. The trauma casts a threatening shadow over her adored young son, Ralph. Exhausted by night terrors and obsessed with the desire to protect Ralph, Alma enacts a terrifying act of baptism that may or may not lead to the peace she craves.

Thompson-Spires plumbs extraordinary depths of interior life and empathy in stories like “The Body’s Defenses Against Itself,” which traces a woman’s memories of her body’s maturation, and the tragicomic “Not Today, Marjorie,” which reveals, with Flannery O’Connor-esque mastery, the history of abuse that scars a very angry woman’s psyche and body during a visit to a local DMV. Stories like “The Subject of Consumption” and “This Todd” explore the destructive elements of fetishism. “Suicide, Watch” and “Whisper to a Scream” are compelling, cautionary tales of social media addiction and online exhibitionism.

These may sound like grim summaries, but Thompson-Spires handles her heavy themes with wit. Paradoxically, her undertaking feels just as urgent and topical now as James McCune Smith’s was in his day, despite the fact that black people “have, on paper, full rights under the law.” Through her telling, in this collection of beautiful stories, we see that our history of trauma is profound and complex, but humor and empathy may be the most useful resources we have to overcome it.